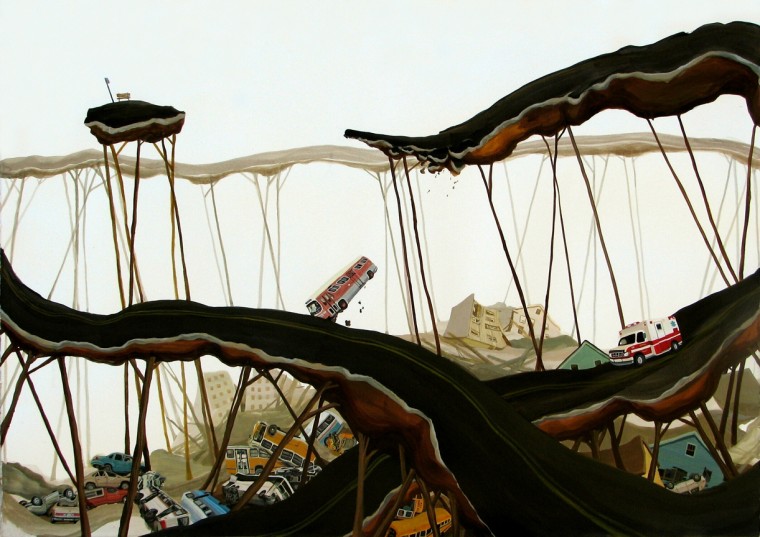 It was a brook, had names
though these bottom stones
are still draining, passing you by

become the light in every stone
as the morning that never turns back
keeps falling without any mourners.

Review by Melanie Kronick Bookout (Note: this review encompasses the three poems in this issue as a poetic cycle)

Perchik’s spare, elusive cycle of three poems on death are highly accomplished in their rhythmic beauty and gestural complexity and in deep response to the fact and mystery of our collective and individual human fate: all are daily dying. And we live, while dying, with the memory of those already dead. Perchik speaks these truths metaphorically, but it is his grammar, syntax, tonal shifts, and line breaks that turn common images (stone, water, star, hand) into gestures suffused with quiet, intense emotion.

Take the first poem’s use of natural phenomena to suggest the eternal law of human impermanence: “It was a brook, had names/. . . passing you by//before letting go the silence/that stays. . . [in] the [same] way each star ends its life alone. . . .” Human names for places and things change over time, erasing the humans who originally named them. Humans, like stars, may die with witnesses, but they die alone. What I omit in my truncated reading above, however, is what makes Perchik’s poem richly emotional, because what I omit is also what contributes to its mystery–Perchik’s affective shifts in perspective and his strange, sophisticated syntax.

To whom is this poem addressed? The first poem appears to me to be addressed to “you,” the reader: “[i]t was a brook, had names . . . passing you by.” A tonal shift occurs in the second verse of the first poem, a parenthetical and cranky aside that addresses “you,” the dead, in a new way: “—you dead are always reaching out//-” with your forgotten names. For a moment, the poet permits us to think in terms of them, those dead souls gone before us. However, he has a big surprise for us. We ask ourselves: just how is it that are the dead are “always reaching out”? Perchik’s answer is embedded in his grammar, in the verbs of the clauses. By “reaching out” and by “letting go the silence/that stays after each hand opens/ . . . end over end unfolding your arms,” the dead engage in motion. Thus, dear Reader, “you” (and I) are the dead, the future dead, who open our hands endlessly to the natural state of permanent impermanence like “the morning that never turns back/ keeps falling.” The second and third poems of the cycle shift perspective, and the “you” becomes the poet himself, who emerges when the true subject of the poems emerge: “her,” she who has passed on before the poet. And yet, it is still we the Readers, the future dead, who remain recipients of the poem’s address because the personal is universal. We who have lost our Beloved[s] have mourned, have wept. Perchik laments for himself and for us: “You water her grave with words/–they never dried, were written/at night. . . .”

About whom does this cycle speak? What is the occasion for the poet’s elegiac tone? The second and third poems lament “her,” the lost Beloved, and by implication, so do we mourn her. “[You] set out on foot//looking for her in shadows” (second poem) and “You water her grave with words” (third poem). The poet’s loss is ours: “. . . looking for her in shadows . . . in a place not even it will remember//how empty your mouth is, lost/day after day spitting into the Earth/that still opens when you whisper to it.”

For me, Perchik’s poems mourn with a Zen-like graciousness, interestingly enough, because of the liveliness of his rhythms and syntax. Each of the three poems in Perchik’s cycle consists of one breathless sentence. Each poem is a gesture, a tumbling compound-complex sentence (with two independent and numerous dependent clauses) arranged in unrhymed tercets. Perhaps Perchik chooses tercets because they challenge the poet to create a concise rhythmic flow that matches his sophisticated syntax. This flow mimes the feeling of ongoingness, of futurity. The sheer melancholy of the poem’s subject (death and loss) is heightened by phrases that pour out quiet sorrow:  “[You] set out on foot//looking for her in shadows/that no longer move though the sink/is covered with something weak//making believe it’s learned where/your fingers are holding the bottle/in a place not even it will remember//how empty your mouth is. . . .”

I am attracted to these poems not only because I cannot nail them down but because their emotional tenor speaks to me, inviting me to abide with them. For example, this haunts me: “You gargle the way each morning/trusts the soft rustle from a dress/becoming dirt. . . .” Perchik’s beautiful sounds (assonance), rhythms, and strange images compel reading. With these poems, Perchik’s personal, impersonal graciousness reminds us that what is most pressing for each of us—sorrow, memory, death—is also what is most universal, most human.