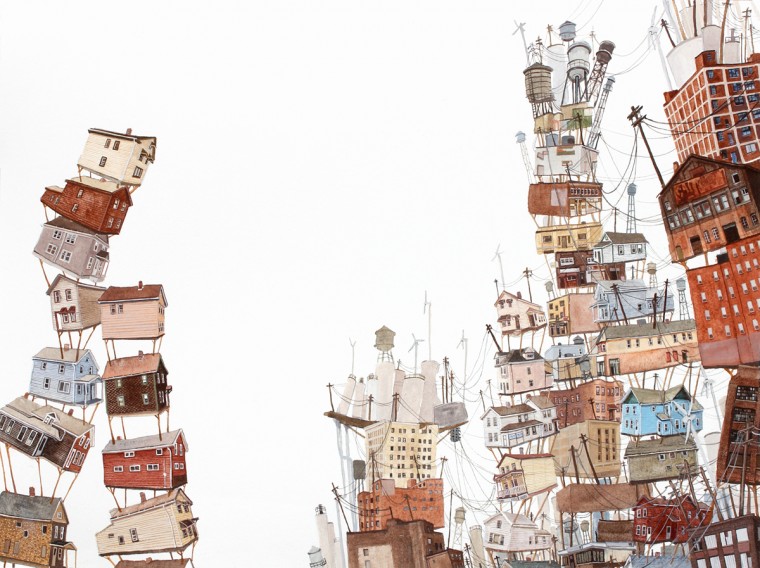 Melanie Kronick Bookout: her poems have appeared in Thirteenth Moon, Ribot [Music], and Soundboard, and she has a chapbook with Potes and Poets Press (Complanctus and All). She recently completed her MFA from Bennington, 2017.

Amy Casey has shown her paintings and etchings of cityscapes nationally with solo shows in Cleveland, Chicago, San Francisco, New York City, Los Angeles, Provincetown, and Homer, Alaska. Drawing on the city around her and sweaty anxiety dreams, Casey creates and reorders impossible cities and upside-down towns. Casey has been awarded three Ohio Arts Council Individual Excellence Awards, the Cleveland Arts Prize, a grant through CPAC’s Creative Workforce Fellowship program and various residencies, including The Helene Wurlizer Foundation in Taos, NM, The Vermont Studio Center, Arteles in Finland, and The Bunnell Street Arts Center in Homer, Alaska. Represented by Zg Gallery in Chicago and Foley Gallery in New York City, she currently resides and works in a crooked little blue house in Cleveland.

donnarkevic: Nutter Fort, WV. MFA National University. Recent poetry has appeared in The Binnacle, Nassau Review, and About Place Journal. Poetry Chapbooks include Laundry, published in 2005 by Main Street Rag. FutureCycle Press published a book of poems, Admissions, in 2013. Many Sparrows, a book of poems was published in 2018 by The Poetry Box. Plays have received readings in Chicago, New York, Virginia, and West Virginia.

Alan Gold is the culturally confused son of an Australian and an American missionary to Thailand. He was enrolled in the PhD program in English literature at Emory University until he realized he was happier as a writer than a scholar. So, he dropped out and became an advertising copywriter, learning the trade and eventually bending it to his own interests by co-founding Westfall Gold—a fundraising consultancy helping non-profits all over the world tell their stories. Now and again, in the rare quiet moment, he writes culturally confused poetry.

James Croal Jackson (he/him) has a chapbook, The Frayed Edge of Memory (Writing Knights Press, 2017), and poems in Pacifica, indefinite space, and Philosophical Idiot. He edits The Mantle. Currently, he works in the film industry in Pittsburgh, PA. jimjakk.com.

Tyrel Kessinger is a stay-at-home dad of two wild animals. Occasionally, he finds the time to write things.

David Memmott’s most recent book is a Vietnam-era anti-war fantasy novel, Canned Tuna (Red Bat Books, 2017). Poems recently appeared in basalt, Gargoyle and are forthcoming from Weber: The Contemporary West. Memmott founded Phantom Drift: A Journal of New Fabulism and is the editor/publisher of Wordcraft of Oregon. (author site: www.davidmemmott.com)

JB Mulligan has had more than 1000 poems and stories in various magazines over the past 40 years, and has had two chapbooks published: The Stations of the Cross and THIS WAY TO THE EGRESS, as well as 2 e-books, The City of Now and Then, and A Book of Psalms. He has appeared in several anthologies, including Inside/Out: A Gathering Of Poets; The Irreal Reader (Cafe Irreal); and multiple volumes of Reflections on a Blue Planet.

Dan Overgaard: A third culture kid, Dan was born and raised in Thailand. He attended Westmont College, ran out of money and dropped out, moved to Seattle and became a transit operator. One turn and another led to a career managing transit technology projects and programs, including voice and data radio communications, real time customer information, electronic fare collection and enterprise applications. He’s now retired and catching up on reading. His poems have appeared in Light and Third Wednesday.  Visit his website at https://danovergaard.com/.

Robin Ray is the author of Wetland and Other Stories (All Things That Matter Press, 2013), Obey the Darkness: Horror Stories, the novels Murder in Rock & Roll Heaven and Commoner the Vagabond, the poetry collection Welcome to Flowerville: Poetry from San Juan Commons, and one book of non-fiction, You Can’t Sleep Here: A Clown’s Guide to Surviving Homelessness. His works have appeared at Delphinium, Bangalore, Squawk Back, Outsider, Red Fez, Jerry Jazz Musician, Underwood Press, Scarlet Leaf, Neologism, Spark, Aphelion, Vita Brevis, and elsewhere.

Mir-Yashar Seyedbagheri is a graduate of Colorado State University’s MFA program in fiction. He is the recipient of two Honorable Mentions from Glimmer Train and has had work nominated for the Best Small Fictions. His work has appeared or is forthcoming in journals such as DREGINALD, The Ekphrastic Review, The Write City Magazine, and Sinkhole Mag.

Preeti Shah has been working in the physical therapy field with the geriatric population and serving under-served communities as a volunteer coordinator and also serves as associate director of communications intern with Young Jain Professionals. Currently she is honing her craft of poetry through her involvement with The Brooklyn Poets monthly Yawp workshops, with author and poet, Jay Deshpande’s workshop, The Letter as/in, and with poet I.S. Jones’ workshop. Her work has been featured in Dash Literary Journal, The Fictional Café, The American Aesthetic, and YJPerspectives.

Mark Trechock published his first poem in 1973, retired from poetry in 1995, then began writing again in 2015. His poems have recently appeared in New Limestone Review, Streetlight and Algebra of Owls.

Katie Tunning‘s poems have appeared in publications including Cider Press Review, Eclectica Magazine, Stirring, and Prick of the Spindle. She stopped writing poetry for about a decade, but then she started again.