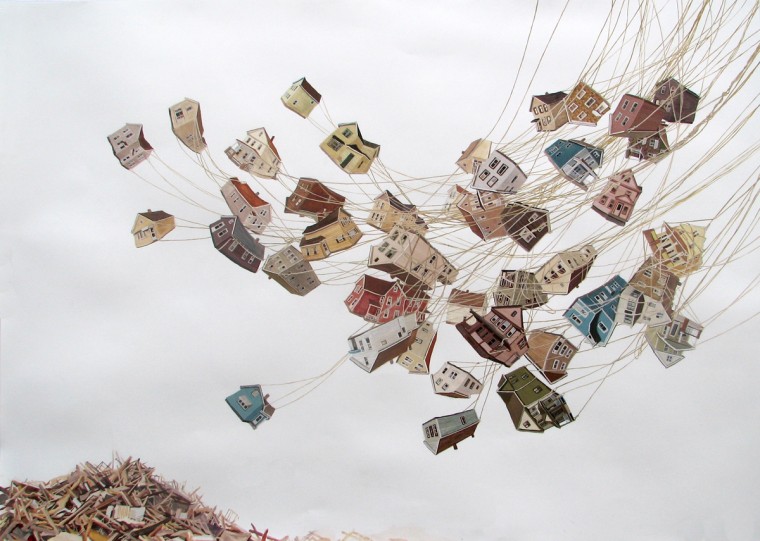 Never had a lesson.
Musicians lived in his fingertips.
He plucked notes like apples
from a low branch, heavy
with tunes. From a past life
he stole lyrics with words
like, love, starlight, darling.
On and on the song composed
itself as we kids laughed
and waited for the end.
But even though we tugged
at his shirt, he sang on and on,
his eyes bright as dimes,
his face set toward the neverending.

Cleaning out the house,
we kids discover a case
crouching on a closet floor
like a child playing
hide-and-seek, afraid
no one will find him.
But we do.
Inside, the ukulele,
the musicians gone,
the lyrics forgotten,
the tunes transcending memory.
As we pass the instrument around,
no one dares to pluck a string,
for there in the silence
we each hear a different voice
go on and on, never wanting it to end.

The two stanzas here play wonderfully together. In the first the reader is introduced to the father who has a natural gift for playing the ukulele and makes up wonderful songs for his children. Toward the end of the first stanza the songs seem to give way to a larger song; my interpretation is that the songs are more than memory, but really filling the idea of creation by casting or framing the relationship between the father and the children. That is, the songs help the family feel connected because the songs create the connection they appear to shape. This interpretation is confirmed by the end of the second paragraph. In the second set the reader is led to believe the father is now no longer playing the ukulele and has not, perhaps, played for some time; there is some suggestion that the father has passed away. The image of the ukulele itself as behaving as a child who fears to be forgotten in a game of hide-and-seek is especially poignant: what could be worse than being left out of a game where one is meant to be found? For the memories and the familial sense of the poem, when the ukulele is found, the connections are also found, and the various seekers dare not to disturb that finding—instead holding to whatever frailty that holds those memories in place is better than losing it. And so we all often make that gamble, and so the poem heightens that sense of what connects us and what we want to connect us.

I liked the down-to-earth feel of this tribute, the instrument through which musicians sing to the world—a simple ukulele and a voice singing old songs to children. Bringing up the past, “his eyes bright as dimes, his face set toward the never-ending.” Then the stanza break and the kids finding the ukulele is clear and intended, “ the musicians gone/the lyrics forgotten” but the memory resonating with the instrument held on the hands of the children as they pass it around. This is a beautiful and heart-felt poem.

A warm memory of a father who never wanted the music to end, even as his children “tugged/at his shirt.” I like how the father made up the words as he went along, totally immersed in the process, “his eyes bright as dimes.” One picky point: why the comma after “like” in the seventh line of the first verse? The line “as we kids laughed/and waited for the end” foreshadows the father’s death. I like that line a lot. The second verse starts on a practical note and ends with the same theme of not wanting the song or the father to end. I am not sure I can picture a case “crouching.” But I like the case wanting to be found, as a memory of the father. The last lines are wonderful. Each child with her/his own memories.

This poem evokes delicate echoes as the poet recalls her father’s playful, joyful singing. Steeped in her own memories, it seems she can now see his melancholy and loss in a way that she and her siblings didn’t then. Discovering the old ukulele brings those memories back, the beauty and loss echoing faintly to each of them in different ways, if they listen closely enough.

“for there in the silence, we each hear a different voice.”

I’m not one for low-hanging fruit. So I will tell you the voice I heard, even though it is a stretch, a reach, and the fruit is unlikely to be what the poet had in mind.

I saw the daughters of Atlas, nymphs of the Hebrides, guarding the apples while their father stayed busy holding their world on his back.

Yet during his musical interludes, their provider laid his burden down and became their hero, a Hercules on his quest, his face set towards the never-ending. (Never mind that Hercules slayed his lyre instructor in a fit of rage. Let us dwell on the positive.)

Though those classic stories are forgotten and turned to myth, it is by drawing from that well we water our stories. It is their voices we hear “go on and on, never wanting it to end.”