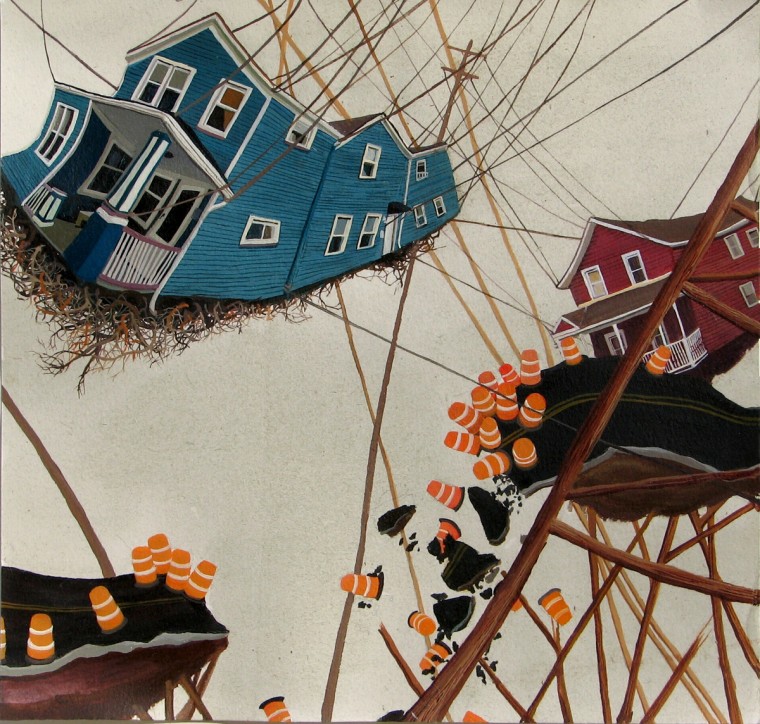 Came across my ninth-grade class
black and white group photo, I was
kneeling on the junior high school lawn,
needed a magnifying glass
to recognize myself
with my would-be Ricky Nelson
hair comb and attempted swagger,
staring into the afternoon sun
while the photographer fiddled
with his camera settings.
A kid can only stare so long,
thus I was posed with my eyes closed
as if my boy self wanted no part
of looking at my 70-year-old face,
and truth be told, after a few seconds,
I had to look away myself.

The narrator at seventy-years-old, looks back at his ninth-grade Ricky Nelson self. A time when everything was black and white, like the photo he scrutinizes with a magnifying glass, as if, in looking for himself, he becomes unrecognizable. His youthful swagger seems replaced with a “70-year-old face,” in living color, one which he wants no part of. The “afternoon sun” has become twilight. Trechock’s poem seems to be an elegy for old age, letting the narrator succumb to darkness.

The fun part of this poem is the double-stare: how the younger Trechock (?) squints into the camera and the older Trechock squints into the stare of the younger. Thus the speaker is both old and young, staring and tired of staring, looking for something else, looking away from himself, even looking for himself by the end—and then tired of doing so.

I love the weaving of past and present in this poem. A ninth grader with a swagger and an older man who looks away from his younger self. Maybe because he remembers the pain of trying to look cool. Maybe because he is so far away from the boy he was. And the dreams of that boy that have or have not been realized in his life. The boy ‘s eyes are closed because he got tired of staring, but also perhaps he knew he wouldn’t want to see the future or have the future look back on him. He wanted to look like Ricky Nelson forever. A lovely poem!

Review by Dan Overgaard (Dan is reviewing all three poems as a group here: 1962, George and Abigail, and Second-Hand)

I think these poems complement each other like the panels of a triptych, three evanescent artifacts close to being lost except—luckily for them—they were found by this poet, carefully preserved and mounted together. I was moved by the timeless, wordless gaze of the boy and the writer, known but unreachable to each other. And how “always and forever” live on in signatures, like that gaze, and yet recede so quickly into mystery.

In its simple but artful way, this poem goes further than expected. The speaker, now seventy years old, inspects his ninth-grade class photo, noting how cool he was trying to be “with [his] would-be Ricky Nelson / haircomb and attempted swagger.” But the boy in the photo has his eyes closed, presumably because the photographer was taking so long to adjust the camera. So here the speaker goes strangely further, imagining that the fourteen-year-old boy has closed his eyes because he cannot bear to see his future self—and then admitting he “had to look away [himself].” There is some fruitful ambiguity in this final line. The speaker has to look away from the picture of his former self, but perhaps, like the boy, he also has to look away from his aged self, the one he now sees in the mirror.