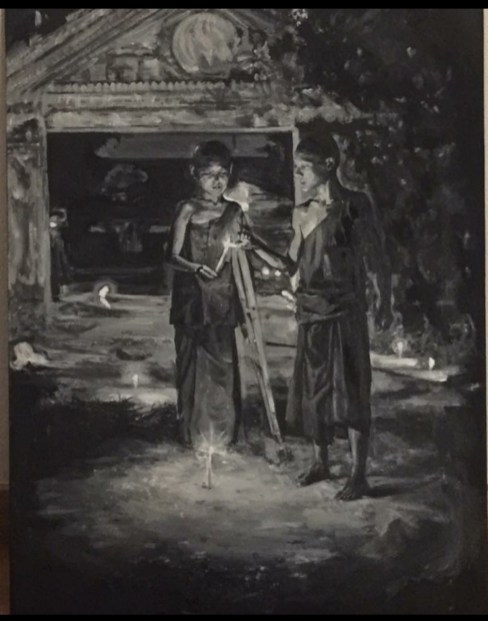 in our spare bedroom
says it’s simply a quirk

the live-in boyfriend is OK
just needs a break, for god’s sake

rearranging it on her plate
retreating to the bathroom

on her frail frame
her hair thin & scraggly

reading Lord of the Flies
listening to Leonard Cohen

yesterday I saw her after a shower

wrapped in a striped towel
thin red lines on her arms

can only be inferred by
its gravitational pull or

I like the deadness of the tone here, it’s foreshadowing from moment one, even before Scott starts adding the little details that tell you this will not end well. I’d poke at the usual suspects somewhat, the adverbs and the gerunds, but what’s really got me mulling over here is that last strophe, when the poem suddenly stops being stanzas. On the one hand I think I get what Scott was doing there with the unexpected/abrupt ending. It underlines what’s going on in the starkest way it can. But then there’s the part of me that still says “oh god the lack of symmetry”. (Even, I should note strongly, as I try to do things like that myself on a regular basis).

This poem touches on serious and scary and real problems, the dark aspects of young people caught in adult problems. While no direct blame can be thrown on the mother or the boyfriend, the reader might presume the niece’s cutting, withdrawal, and even need to escape are indicative of neglect (perhaps at best) and abuse (at worst). The split first lines of each paragraph emphasize this shattering, and the first parts of the lines help indicate the niece’s position: sleep, cutting, baggy, lies. The allusion to Lord of the Flies also indicates the niece’s being left alone to fend for herself and the sort of savage state the speaker notices about her.

As such, the conclusion regarding the way dark matter is considered becomes a wonderful metaphor for how we are interested in each other’s lives, but too worried to foist our own considerations onto another’s life. Instead, we treat each other like poems or dark matter—seeking symbols, clues, signs for truth (at its best and worst) and comfort. This poem holds that human method and helps us practice it, and, if we’re careful, we see our own methods of investigation called into question and confirmed. This poem doesn’t preach: it holds out its hands and says, It’s ok, baby, rest awhile.

This poem works, gives a vivid picture of the niece, and the unusual line breaks help, and I would like to understand better how that works. Maybe it’s that the scattered appearance of the lines mimics the “disorder” of the niece’s life.

The first line of Claire Scott’s brief and arresting poem, Dark Matter, unfolds the central theme of the poem through its use of space on the page. The line “my niece sleeps,” opens the poem, placing the reader at once in the intimate space of a bedroom, but at the same time acknowledging that the sleeper is partially unknown to the speaker in the way that second degree relatives almost always are. To underscore that distance and to give the reader a visceral sense of the mystery of this girl, that phrase is followed by a wide space, into which the poem seems pour some of the uncertainty and emotional messiness that is later threaded throughout the poem. The phrase following this first wide space, “with the lights on” invites the reader to sense something unsaid in the center of the line. What is missing in our understanding of this girl? Why does she, a niece, but not a daughter, insist on sleeping with the lights on? What is it that she fears?

The figure of this sleeping girl in a lighted bedroom presents a question, a why, that is situated in the empty space on the line. The unfilled space of a missing answer that takes root in unfilled poetic space. Right away, the reader knows that some key fact is perhaps known but not articulated. The gap in the line, like the lighted room, seems to infer something wounded, cut out or missing. Something for which the light in the room is intended as a salve.

In a choice that gives shape to the remainder of the poem’s following stanzas, the two lines that follow this first one omit the large tabbed space. Instead, these standard lines, “in our spare bedroom / says it’s simply a quirk” attempt to rationalize and explain away the empty space. They are supposed to fill the reader in as to why the girl needs the lighted room, and in that way they attempt to bridge the hollow at the center of the first line.

That same structure, a line with a hollow and thus a question at its center, followed by two more logical lines that describe the seen and known world, repeats throughout the poem. This construction, suggests a tension between what is felt and said, between the emotional world and the tactile one.

That tension continues throughout the poem until the stunning last lines:

These last lines place the phrase “our disordered lives” in the space that the poem usually reserves for rationalization and explanation. In concluding the poem this way, with an emotional truth in the place where the pattern of the poem has primed the reader to expect hard facts, Claire Scott surprises the reader and gives a powerful new meaning to all the lines that have come before this last one. This final line provides the reader with weight and context and, in a recursive way, invites the reader to move back to the beginning of the poem, to attempt to understand the facts, explanations, and gaps in the lines in light of this new emotional truth.