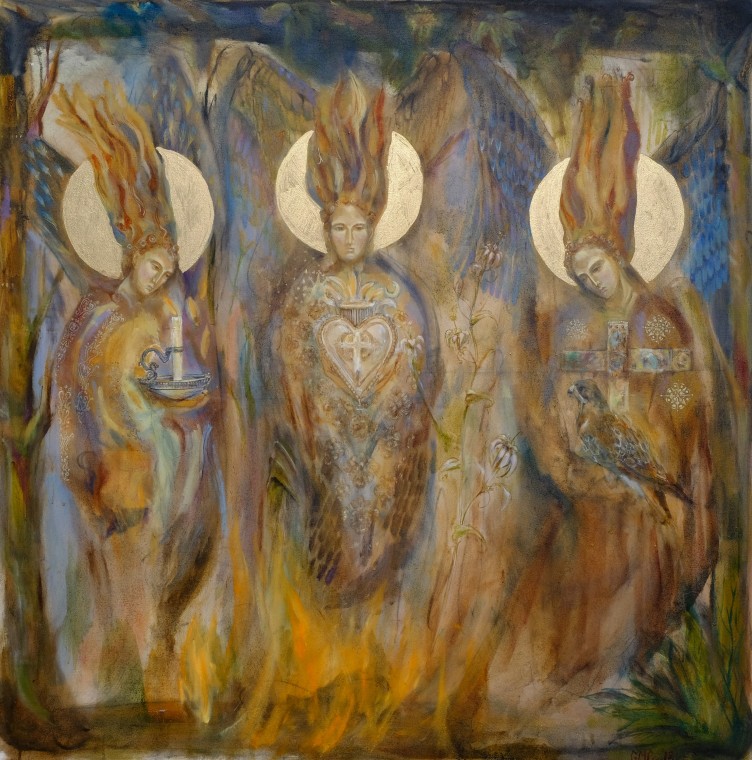 Robert Beveridge makes noise (xterminal.bandcamp.com) and writes poetry in Akron, OH. Recent/upcoming appearances in Savant-Garde, Other People’s Flowers, and The Indiana Horror Review, among others.

Louis Bourgeois is the Executive Director of VOX PRESS, a 501 (c) 3 art and literature publishing house based in Oxford, Mississippi.  Bourgeois is also the founder of VOX’s Prison Writes Initiative, the only comprehensive liberal arts education program offered to Mississippi inmates. His Collected Works will be released in the fall of 2020 by Xenos Press.

Michael Chin was born and raised in Utica, New York and currently lives in Georgia with his wife and son. His hybrid chapbook, The Leo Burke Finish, is available now from Gimmick Press and he has work published or forthcoming in journals including The Normal School, Passages North, and Hobart. He works as a contributing editor for Moss. Find him online at miketchin.com or follow him on Twitter @miketchin.

Tricia Marcella Cimera is a Midwestern poet with a worldview. Her work appears in many diverse places — from the Buddhist Poetry Review to the Origami Poems Project. Her poem The Stag won first place honors in College of DuPage’s 2017 Writers Read: Emerging Voices contest. Tricia lives with her husband and family of animals in Illinois / in a town called St. Charles / by a river named Fox / with a Poetry Box in her front yard.

David R. Cravens received his undergraduate degree in philosophy at the University of Missouri Columbia during which time he spent a semester in West Africa studying eastern philosophy. Afterward, he spent several years working as a scuba-diving instructor in the Bahamas, the Florida Keys, the Turneffe Islands of Belize, and the Channel Islands of Southern California before returning to Southeast Missouri State University where he earned his master’s degree in English literature. He’s a member of Phi Kappa Phi, Magna Cum Laude, Sigma Tau Delta, The National Eagle Scout Association, and American Mensa. He started his writing career as an adjunct professor of English studies at Central Methodist University, and since that time he’s published widely, both in the US and abroad, as well as winning the 2008 Saint Petersburg Review Prize in Poetry and the 2011 Bedford Poetry Prize. He currently teaches composition and literature at Mineral Area College.

Darren Demaree: My poems have appeared, or are scheduled to appear in numerous magazines/journals, including Hotel Amerika, Diode, Meridian, New Letters, Diagram, and the Colorado Review. I am the author of eight poetry collections, most recently Two Towns Over (March 2018), which was selected as the winner of the Louise Bogan Award by Trio House Press. I am the Managing Editor of the Best of the Net Anthology and Ovenbird Poetry. I am currently living and writing in Columbus, Ohio with my wife and children.

Kyle Foley: Kyle Foley is the founder of www.deductivemetaphysics.com, a website which can calculate the truth-value of metaphysical statements. He lives in San Diego, California.

George Freek is a poet/playwright living in Belvidere, IL. His poetry has recently appeared in Carcinogenic Poetry; Big Windows Review; Tipton Poetry journal; and The Sentinel Literary Quarterly. His plays are published by Playscripts, Inc.; Lazy Bee Scripts; and Off The Wall Plays.

Ed Higgins‘ poems and short fiction have appeared in various print and online journals including recently: Ekphrastic Review, CarpeArte Journal, Under the Basho, Wales Haiku Journal, and Sum Journal, among others. Ed is Professor Emeritus, English Dept. and Writer-in-Residence at George Fox University. He is also Asst. Fiction Editor for Ireland-based Brilliant Flash Fiction. He lives on a small organic farm in Yamhill, OR where he raises a menagerie of animals, including including a male whippet, Mr. Toffee and an Indian Runner duck named Duck.

M. A. Istvan, Jr., PhD, born and raised in a functioning ghost town (now turned hipster haven), has a gift for sensing the vibrational frequencies—the earth spirits, if you will—of even the densest flesh: tree, stone, mineral. A certified (but failed) forest-bathing therapist, Istvan writes best—bestial—faded into the backgrounds of brothels, tended to by the ladies for whom his focused presence proves that men can want—can be—something more. Most people stay out of Istvan’s vicinity. His hurried step, fierce expression, and wild hand gestures while speaking (speaking in what is perhaps best described as auditory cursive) set off the insanity-detectors ingrained in us by deep history.

Andrea Jackson: Her poetry and fiction have appeared most recently in Star 82 (*82) Review, Gyroscope Review, Eyedrum Periodically, Heron Tree, The Tishman Review, and The Apple Valley Review. She has received 2 Pushcart nominations and one nomination for the Best of the Net Anthology, has an MFA from the University of Missouri-St. Louis, and has recently published Who Am I and Where Is Home? An American Woman in 1931 Palestine, described by Small Press Bookwatch as “an absolutely fascinating, deftly crafted read from cover to cover…an extraordinary, candid, engaging, account of an inherently interesting woman in an inherently interesting time.” www.andreajackson.net.

Mark J. Mitchell‘s latest novel, The Magic War just appeared from Loose Leaves Publishing. He studied writing at UC Santa Cruz under Raymond Carver and George Hitchcock. His work has appeared in the several anthologies and hundreds of periodicals. Three of his chapbooks— Three Visitors, Lent, 1999, and Artifacts and Relics—and the novel, Knight Prisoner are available through Amazon and Barnes and Noble.. He lives with his wife, the activist and documentarian, Joan Juster and makes a living pointing out pretty things in San Francisco.
A meager online presence can be found at https://www.facebook.com/MarkJMitchellwriter/

Sean Murphy has been publishing fiction, poetry, reviews (of music, movie, book, food), and essays on the technology industry for the last two decades. He has appeared on NPR’s “All Things Considered” and been quoted in USA Today, The New York Times, The Huffington Post, Forbes and AdAge. He writes regularly for PopMatters, and his work has also appeared in Salon, The Village Voice, The New York Post, The Good Men Project, All About Jazz, AlterNet, and Northern Virginia Magazine. He has been nominated for the Pushcart Prize, and was the writer-in-residence at Noepe Center at Martha’s Vineyard. He is now Executive Director of the Virginia Center for Literary Arts. To learn more, please visit seanmurphy.net/.

Jared Pearce: Some of Jared Pearce’s poems have recently been or will soon be shared in Shot Glass, DIAGRAM, Straylight, Rosebud, and Picaroon. His debut collection, The Annotated Murder of One, is due from Aubade Press this year (http://www.aubadepublishing.com/annotated-murder-of-one).

Corie Rosen: A native of Southern California, I currently live in Denver. My prose and poetry have appeared in a number of magazines, including recently in Crab Creek Review, Museum of Americana, Konch Magazine, Two Cities Review, Paradigm Journal, Juked, and Bangalore Review. My work has been a finalist for the Katherine Anne Porter Prize for Fiction, has been nominated for the Pushcart Prize, and has also been featured on NPR.

Maggie Rosen lives in Silver Spring, Maryland. Her poems have been published in Little Patuxent Review, Waccamaw, Beltway Poetry Quarterly, Barely South, and Conclave, among other publications. Her chapbook, The Deliberate Speed of Ghosts, was published in 2016 by Red Bird Chapbooks.

Gillian Sargeant: Gillian was born in Peebles, Scotland and studied Art and Illustration at Anglia Ruskin University, Cambridge, England in the UK. Her artistic motivations include the themes of the ethereal world, the life of faith, relationships and love. Her artwork extends from Orthodox iconography which was the influence and training behind her modern pop icons, religious themes, the lives of those suffering as refugees and displaced people and portraiture. Gillian lives in Boulder, Colorado with her family and has four children.

Anum Sattar is a junior studying English at the College of Wooster in Ohio, USA. Her poems have been published the American Journal of Poetry (Margie,) Triggerfish Critical Review, Crack the Spine, Taj Mahal Review, #thesideshow by FIVE 2 ONE: An Art and Literary Journal, The Linnet’s Wings, Ragazine, Better than Starbucks! The Florida Review, Snow Jewel Journal by Grey Sparrow Press, Oddball Magazine, Artifact Nouveau, Off the Coast, Strange POEtry, Between These Shores Literary & Arts Annual, Conceit Magazine, A New Ulster, The Cannon’s Mouth, The Journal (i.e. The Journal of Contemporary Anglo-Scandinavian Poetry,) Wilderness House Literary Review, Poydras Review, The Cadaverine, Verbalart: A Global Journal Devoted to Poets & Poetry, The Wayne Literary Journal, The Ibis Head Review, The Weekly Avocet (every Sunday Morning,) Poets Bridge, Deltona Howl and Tipton Poetry Journal. She won the first Grace Prize in Poetry  and third Vonna Hicks Award at the college. Whenever possible, she reads out her work at Brooklyn Poets and Forest Hills Library in New York City. And she was recently interviewed at Radio Free Brooklyn.

Claire Scott is an award winning poet who has received multiple Pushcart Prize nominations. Her work has been accepted by the Atlanta Review, Bellevue Literary Review, New Ohio Review, Enizagam and Healing Muse among others. Claire is the author of Waiting to be Called and the co-author of Unfolding in Light: A Sisters’ Journey in Photography and Poetry.

Anna Weaver: Raised in Oklahoma, Anna Weaver lives in North Carolina with her two daughters. Her poems have appeared in Connotation Press, O-Dark-Thirty, One, and elsewhere. She writes as a former soldier in the US Army Reserve, a mind solidly imprinted by 20 years under big sky, and a woman “with loyalties scattered over the landscape.” She is, so far as Google is concerned, America’s only open mic tourist (openmictourist.com), and has performed her poetry in 27 states and the District of Columbia.

Theodore Worozbyt: Worozbyt’s The Dauber Wings (Dream Horse Press, 2006) won the American Poetry Journal Book Prize, and his second collection, Letters of Transit, won the 2007 Juniper Prize and was published by UMass Press. Smaller Than Death won the 2015 Knut House Press Award. Objectless Fragments appears in the premier issue of The Chapbook. Scar Letters, a chapbook, is online at Beard of Bees Press. His work has recently appeared or is forthcoming in Po&sie and The Southern Review.

Sanjida Yasmin is a Bengali-American storyteller and poet whose work explores South Asian traditions, transient movements from East to West, and most importantly, the mystery of time. Her poems have appeared or are scheduled to appear in numerous magazines/journals, including Pink Panther Magazine, Peacock Journal, The Promethean, Nebo, Panoplyzine, Poetry in Performance, Anomaly, Linden Avenue Literary Journal and Helen Literary Magazine. Raised in the Bronx, NY, she graduated from The City University of New York where she wrote her MFA thesis on the senescence of mortals. She is a lecturer by day, wordsmith by night.