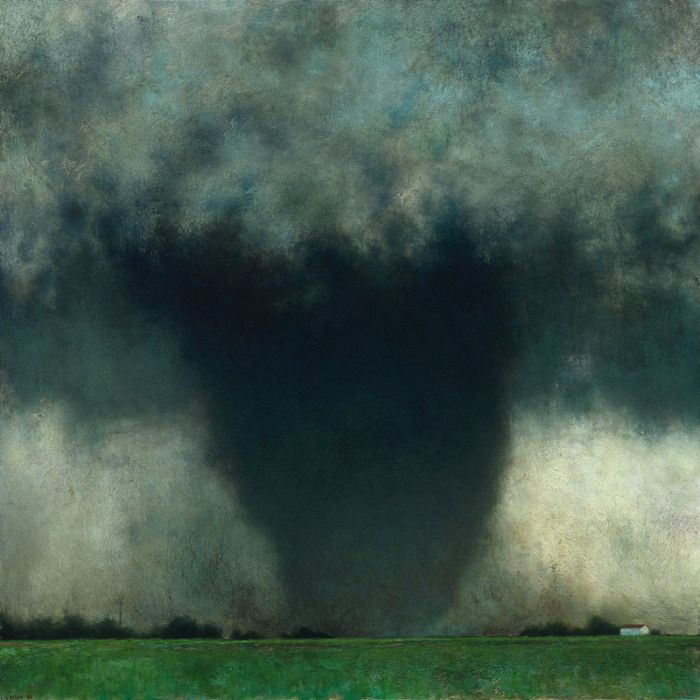 Things unglue in a tropical depression it seems
they disconnect. A wet dog from the ’50s might show up
suddenly or someone is shouting again

as bullets ping pong in the wind
where stalling rotors knock. But no one’s home.
Two outs, full count on the batter–a cup of tea?
Sometimes you just lose track of things.

I lost track first
when her parents drove to Alaska for the summer
is short there compared to anywhere else the South
is hell with humidity in June anyway it rains all the time. Try

to stay on the subject.
Lois didn’t like all those snakes and bugs chasing her
home after school which is why she smiled through the car window
when they left her father said–young man–to me.
It’s only a vacation, she’ll be back.

I was young
and the mist grew like lichen on the rocks of my eyes.
Alaska meant I wouldn’t see the sidewalk through the rain.

Those Brits three houses down
they know about weather, too.  They get all crumpet-wise
at tea time if they can’t see their empire through the fog
and their whole tennis ball world always needs another cup.
There’s nothing can be done sometimes.

Try anyway.
I remember our neighbor’s dog, King, came skidding
through the wet grass, turning corners like a race car
and barking when Lois left. You never should have fed him, Lois,
I whispered as Lois disappeared.  Now he loves you.

Night time is still
a choir practice for the dogs
of memory. That clockwork of Sundays, the friends
who never came back.

It’s been awhile since
the turbo-charged airborne wagons left me behind
in weeds by the river, my bags still full
of treats for villagers. The weight of explosives
clung to my neck all night

like a starving dog chewing its leash.
Or maybe it was I chewing reeds that chewed the muck
of chewing insects chewing the dead man
to a chew of rotors receding in the distant night air.

A game of ping pong I suppose
was inevitable, bouncing loose connections like nothing
can corrupt a flea market of memories.  Back and forth night
between backhands was knotting one disappointment to another
stringing real bullets to the forehand volley.

I thought of Lois that night
and her father so suburban in his driveway,
a station wagon’s motor droning in morning air,
a lawn wet from last night’s downpour.  I saw passengers
peering between bundles like gunners from the openings.

And for a moment in that loneliness
God was a stocking on the leg of a Saigon whore.

I feel sometimes like I’ve lost my knack for critiquing or reviewing poetry by other poets. Or maybe it’s just gone rusty. I feel like my own voice and style have developed a confident inner compass to a point where I worry during a critique that all I’m doing is merely critiquing a poem to match the way I myself would have written it. I must resist doing a critical rewrite that would change the poem into my voice, and dishonor the other poet’s. I’m sure many translators of poetry struggle with this necessity: making a new poem of one’s own out of one that already exists.

I notice my concern to be particularly present when I am looking at a poem that even though it is enjambed is basically written in correct prose grammar and syntax. I feel very strongly that poetry doesn’t need to strictly follow the rules of prose grammar and syntax. In fact, it probably shouldn’t. “Breaking the rules” is one important aspect of what makes it a poem, rather than prose.

When I encounter a film like Darren Aronofsky’s “The Fountain” or Terence Malick’s “”The Tree of Life,” I exult in the aliveness evoked in me by the experience of immersing myself in such films. Poetry is made of words, and sometimes words can actively get in the way, and push back that experience of aliveness, make it more distanced and cerebral and emotionally/psychologically safe; and I think a lot of contemporary poets practice exactly that kind of poetry, safe and cerebral and nonthreatening, precisely because it’s safer that way. Far too many poems, like far too many movie scripts, try to shoehorn all of life into linear narrative structures with pat endings, all the loose threads tied up neatly.

Plus, we live in times when cultural and artistic ironic distance and cool hipness have become privileged over authenticity and gut-level response. I constantly return to Adrienne Rich’s comment that a poem shouldn’t be something written ABOUT an experience, it should BE an experience. I aspire to write poems myself that are experiences, not commentaries on experience. It’s harder than one thinks it is—although for myself practicing other arts, like painting and filmmaking, do help with this. Yet when I read a lot of contemporary poetry with an eye towards reviewing or critiquing, I find that most of it falls short. A lot of remains cerebral, detached, ultimately irrelevant to life.

So when I encounter a poem such as Ed Wickliffe’s “The Tropical Weathering of Corporal Triggs”—and I shall disclose that I’m long-standing fan of Ed’s—the light in the room sharpens, the air crisps, and I feel dragged awake into a genuine EXPERIENCE.

There is word-play and wit enough here to satisfy most language-oriented poets, glittering disjunctions and sudden parataxis to please most post-avants. The poem is polished. And many of the jump-cuts are funny. Yet all the surface encrustations serve a deeper, almost cinematic expression. The poem isn’t linear, it keeps circling back around again, stuck on its own awareness of its own scattering and dissolution: “a choir practice for the dogs / of memory.” The amusing turns of phrase are like surface sparkle on the water, with sadness in the depths beneath. I experience the poem on multiple levels simultaneously.

As I read, and as the narrator re-reminds himself to stay on the subject, I experience the feeling of weathering, of the erosion of consciousness into its rusted and oxidized constituents. The poem evokes, from the inside, what it’s like to fall apart. When the words, and the consciousness of which the words are a stream, fall apart, as a reader I fall apart too. Poetic ambiguity comes with the layered experience. I cannot tell if Corporal Triggs is a person who is losing his mind, or if Corporal Triggs is the name of a rusted and weathered boat, grounded on the beach, battered by hurricanes, falling into ruin. I like this crumbling ambiguity; it evokes in me both memories and the consciousness of the endless chatter in my head, the inner narrative we all have inside, what the Buddhists call the “monkey mind,” always chattering, never still, usually not very focused.

The “soft” ending, neither a tying-up of loose narrative threads nor a thumping orchestral conclusion, evokes in me the mind’s final dissolution into silence, but also opens the poem up into endless time. The “lack” of a “strong” ending is perfect here. Putting a final thump in, like the moral of a fable, would take away all the energy that the poem has built up. Instead, things fall apart some more, leaving us following a whisper-trail into nothing.

This poem works really well for me as a reader, because it does what it says it’s going to do in the title—tropical weathering—and thus the poem is an experience. It shows by doing, from the inside. Reading, I feel the sun’s heat on my shoulders in Florida, and also the whipping wind and rain in that threshold moment when it turns from hot to cold. This is a liminal poem: of the threshold.