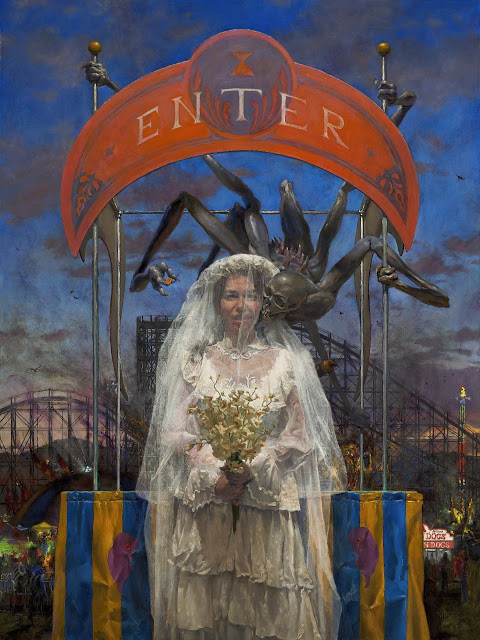 A Trip to the Palm Reader

The palm reader had a red and white picnic blanket pulled over her
dining room table, Micro Machines on the floor, a glistening pacifier she tossed
into the sink as I sat.
I was happy about her turning
the lights off except for the one directly overhead and I liked the incense,
but she didn’t even pull her sleeves up to the elbows the way I pictured.
And no bracelets.
A purple curtain would’ve been nice, blocking my view of the clean kitchen behind her,
the Flour and Sugar jars facing me together.
She took my fifty bucks up front then made me put my head on the table
to relax
as she drew all manner of shapes on my sweaty palm.

I awoke when she flipped the kitchen lights back on. She said it might be a good idea
to develop relationships with older people, People closer to death.
I asked her if anyone else had ever fallen asleep during a reading.
She said no
and recommended getting more sleep as well. I visited a retirement home
and told the pretty girl at the desk I want to keep a lonely person
company.
She showed me to a room like she had it picked out already and has just been waiting
for me to arrive. I had a hunch the palm reader really works here
and foretells people into volunteering.

In the room, an old man was struggling to fold his newspaper back up.
Can I help you with that? I asked him. He said he’s been folding and unfolding newspapers
his whole life,
And this is among the worst of them. He laughed and kept fiddling
with it helplessly until I was more frustrated by it than he was. I snatched it from him
and folded it up crisply.
Well what are we supposed to do now? he asked, That was my whole evening.
After taking a seat he promptly fell asleep.
On the way home, an old girlfriend
of mine (ex is so spiteful) hugged me on the street in the rain.

As I neared the entrance of my hotel, the doorman extended his hand
at eye-level in the manner of a high-five
and as I instinctively lifted my hand to return the gesture, he suddenly froze
his hand at chest-level in the manner of Stop.
To salvage my arm’s motion, I scratched my head
and the doorman asked for my room card. I carry a stack of cards and cash
folded together in my pocket because I’ve never found a wallet that pleased me.
This apparently did not please the doorman
but I wasn’t out to please the doorman.
Under a sheet of clouds I hid my hands in the best pair of pants I owned.

Sometimes you read a poem and before you know it, you’ve been on a journey to a far off place, and if you’re lucky enough, you went there without realizing it until you’ve returned home again. That’s how this poem’s experience was for me. Maybe the process of immersion was a little “Bigfish” like in that I’m not sure what was true and what wasn’t, yet the peculiarity of circumstances depicted in this slightly unsettling yet witty piece doesn’t seem to stem from what’s described, but all that’s left unsaid as we’re gently lured into a series of events by a very likable and quite possibly occasionally, facetious speaker.

Falling asleep while having your palms read seems highly unlikely and completely unfulfilling if one is trying to gain insight from the experience, unless of course something remarkably mystic happens during what is called ‘sleep’. Perhaps the most intriguing moment of this narrative piece for me was the suggestion from the fortune teller to the speaker that he should spend some time with someone closer to death. I found the choice of word ‘closer’ curious as well as the idea that this suggested forthcoming encounter might offer the narrator some form of enlightenment; an illuminating moment linking certain significance back to his own life. Whether or not an epiphany was meant to be had remains unclear, yet the mere action of rustling with a newspaper becomes an integral part of the shared meeting with an elderly man who seemingly lives within the process of folding and unfolding a paper, even when an unlikely caller stops by disrupting his nightly ritual. How perfectly ironic and somewhat humorous it is that the old guy falls asleep while in the presence of the narrator. If death is ‘close’, this aging gentleman seems unconcerned.

It’s interesting as well that the speaker coincidentally encounters his ex-girlfriend in the rain on his return home, where she hugs him as he notes to the reader, her spitefulness. I can’t help but feel his annoyance at such an insincere gesture after his trying to glean something substantial from the earlier engagement. I love the way we are clued in to the speaker’s feelings towards his ex through a subtle jab concerning her behavior. Loneliness feels like a predominant theme running throughout this piece along with a gentle dose of sarcasm. With every connection a disconnection follows, something beyond the scope of the narrator’s abilities to resolve or find the answer to his search.

Finally we are left with the hurried anxiety of a doorman who retracts a friendly greeting only to ask for formalities such as room keys and such. It certainly seems apropos that after all is said and done the hands that begin the poem, the same hands that may have been read or more precisely unread become just like the paper, put away, or hidden “in the best pair of pants I owned”.

No interpretation of palms, folding or unfolding of papers with people closer to death, no embracing of exes or attempts at the high-fiving of doormen hails a contented ending. Might the doorman represent the eventual gatekeeper to death and if so, why is this concierge not quite so welcoming? Perhaps the speaker is indeed unready for his story to end, his hands surreptitiously hidden while he stands at the ingress or entrance of what he and the reader can only interpret as the vast and wildly unknown.