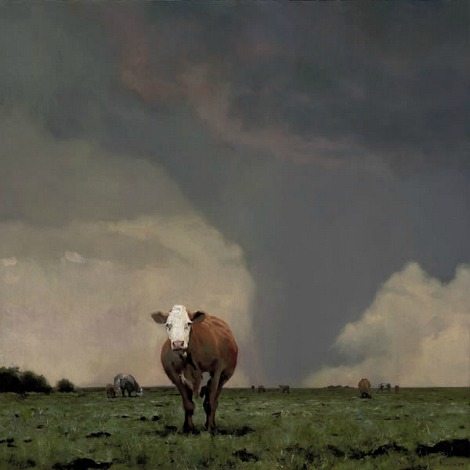 I have to leave
to dip meats and pockets of meats
into scalding baths of bad grease,
hoping and hoping for a good life.

To work the slick, pale chicken bodies, wearing my worry-halo.
To listen, saved, to the gentle crack of skeletons separating
in my hands as I force them down steel skewers.
A song playing on the radio I vaguely like.

Strangers glance at me across the counter
as though to maybe find the answer
as to why we are mysteries and
what, then, becomes required.

There were so many of us,
it made me lonely.

Aaron said Hitler was only realizing God’s work
but he was just joking in a dimension where everyone is Jesus
and embarrassed because of it. And he was,
because his skin was so sad and so filled with blood.
And he took pictures of his life with his ergonomic phone
and sang pop songs that made blood rush through his flesh.

It’s understandable;
We sliced turkey experiences for a living,
and one afternoon in the late 90’s, Dianna
found her husband in the backyard, drooping from a maple.

Not to mention the second grade, when her best friend
got her head cut off, offering a stranger everything;
Her red blossoms under him like a huge petunia.

She started praying to Jehovah, grew her hair long
and got hired at a hospital in Tacoma to cart bodies
back and forth from the morgue

like a young earth-woman pushing the reason
we burst from our mothers through hallways.

A family came in to the E.R. one night.
It was a car accident.  The son’s skeleton
was crushed to flour.  His mother laughed,
hysterical, as they pulled bits of glass from her forehead.

Her blood, recycling itself, smiles at me
from across the room.

She takes the cart
to the fridge to get more whole-bodies
for the rotisserie and our grief.

When I found out Donna’s son’s friend
accidentally shot him in the skull
thinking the pistol was a bb gun,
I said I was sorry,

the worst thing you can say,
and her eyelashes sprouted like spider legs,
and the air was undeniable, and we stared
at the world until it became our lives.

When she slipped on the wet linoleum,
it was comical because she survived
with a wild dance. To this day
we laugh for our lives.

What happens when I read Dave’s Market, as with many of Eli Holley’s poems, is that I become surprised. He writes sentences and these sentences are often framed to imply cause-and-effect. The first part of the sentence establishes some image or scenario then the next part states the result. But Holley’s results are often surprising. E.g.: “There were so many beautiful children, / it made me lonely.” The dissonance—or false causation—of the cause and the effect creates exciting textures. For instance in the line just quoted, we have the sight of beautiful children causing loneliness. And though I am surprised, I buy it, and instead of scoffing, I think of the strange depth of beauty, the wistfulness (?), the yearning (?) the shadow of it. The poem works because when he asks me to leap, I leap. And I am delighted where I land.

Let’s see another one. “It’s understandable because / we sliced turkey experiences for a living / and Dianna found her husband drooping from a maple.” Here we have mundanity suddenly turning morbid. It is the semblance of logic in his phrasing, then the betrayal of that logic, that creates the unique effect. I’d call this an internal logic or alternative logic. Because in the face of a denied logic, I would be forced to read the lines as simply absurd, but here I’m not. I stretch to “make sense” of the strange connections and I’m rewarded with new connections. Which is exciting.

Holley offsets his convex cause-and-effect sentences with stanzas of short simpler ones. Something to grab on to. The effect is like swinging through a line of monkey bars—the simple image then the departure, and so on.

There is no question that this is a poem “about” flesh. We are in the meat market, we have Aaron who we know little more about than that he tells jokes and has blood, there is a suicide, a murder, a morgue, and in the end there is laughter, hysterical laughter. An attempt of the mind to topple the flesh. A mostly failed attempt. “We laugh for our lives.”

Although, the laughter is only hysterical once and the rest of the time it is genuine. If we think of laughter as a physical form of “internal logic,” an alternative to the weight of life’s grim events—then we have a symmetry between the content of the poem and its form.

Holley accomplishes not a denial, but a side-stepping of dismal logic. As laughter is not properly an “escape” from difficult life circumstances, Holley’s peculiar form isn’t an escape from logic, “because we can’t escape heaven.” We cope. We learn to live with the disease instead of rabidly seeking a cure. And we laugh.