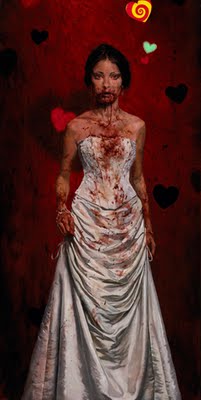 You didn’t ask to hear from the man at the top about how he used to drive an IROC convertible, cruise around blasting Whitesnake’s Slide it in. (Sidebar on how great the ’80s were: sexual euphemism supplanting romance, etc.) Still, what follows isn’t his fault really —an afternoon of coworkers attempting wit: You know what IROC stands for, right? Dan from accounting responding to each: Hey! That’s an insult to retards!

Heaven isn’t here; why not dispense with preambles: go. You wish you’d make a scene, find yourself too in love with the literal: On a ship outside San Juan, a man or woman (too far to tell for sure) watches dawn break over the city like a bone. You’d make neither the island nor the ship were you to dive in, swim for it from this imaginary here. He or she does not wave. You smile a weak steam in no particular direction: a pleasant, off-hand humidity of purpose.

(None of this is you; perhaps it’s that un-waving, unreachable stranger. Eight hours could be a workday, a night’s sleep, equivalent to the distance between you and some terrible thing. Who knows?)

Perhaps the one who isn’t you claims an understanding of companionship—something like the act of breaking bread with another. You doubt there is that much beauty left in the deepest breath. A hand to cut what might be rope. A hand to hold what might be weight. There are no letdowns; they are not easy.

On the break room TV a big-titted chef calls something delish! Despite this, you’d totally do her. Despite that, you have a healthy opinion of self. Despite it, you realize it’s not only you; everyone here wants to die already.

I am always left admiring Eric’s poems for the sheer compression of it all. The craftsmanship. So much information & thought-feeling wrapped into a candy bar, which, once you eat it, it does wondrous things to your cells. Sometimes the radio cell picks up earth-bound signals & sometimes it also manages to make a stand without towering. Pardon the intro. But Eric Hohenstein’s poetry occupies that bardo between the poles of a) poetry which is read to recollect heartfelt emotions in tranquility and tranquilized language and b) the worshiping of the signifier that so much of language poetry buys into. The amazing bit is this poetry builds on both of the poles I just talked about but it does not sacrifice depth of emotion for clarity or saying it like it is. This poetry admits that there is a need to speak in a language wholly our own. A glossolalia that is more true to poetry, more true to our emotions than most of the stuff bandied around as just so.

Those of you reading JH Prynne, and have grown to like the amazing alien structures that Prynne builds, will find a possible axiom in Eric’s work—only it draws you in more easily. There is more of that looping thing in Eric’s poems. You start reading one and soon enough you come up against a tide of emotions and lyric and subroutines.

Coming to the poem, I’ll not get into specifics about why I like it. I’ll in fact leave you alone to look at it as you would a finely wrought piece of art. You don’t want someone breathing down your neck telling you “Ooh. See what’s to like?” But just for a moment I’d like you guys to chew on one line,

“You smile a weak steam in no particular direction: a pleasant, off-hand humidity of purpose.”

That line and those around it speak to me of someone out at sea—Melville specifically. That humidity of purpose. I am reminded of Melville’s obsession, writing in his attic, watching the steam emerge from his head, introducing whale metaphors by the dozen in his letters and really buying into the stuff. Buying into it enough to really carry a bit of the sea within his soul, draw in gulps of air to survive in the deep. Just like N here, none too different, surviving in an element where he will get suffocated if he opens up, tries to delineate, categorize and confess his otherworldliness or just that it isn’t too easy. Ending with a bunch of images, appropriating Ahab and still being Ishmael, an orphan.

See what I did with Eric’s poem? Nothing disrespectful or particularly flippant. But I wove a meta-narrative around it which probably does not add much to the ongoing narrative about the guy at work overhearing things and displacing them, sublimating them, into finely-tuned poetry. But my read does speak something about the imaginative or imagistic potential of much of this poetry. You can call it surreal, for after all, Breton himself understood that surrealism (and as the poet Will Alexander also puts it) need not be a monolithic thing, but will change form with the ages.  But rather than classifying Eric’s poem I’ll now leave you to read it and decide for yourself what it does to you. Welcome to Barthe’s writerly text.