Snow drives in around the porch edges. Puffs of whitegrained breath, fallen on
uninsulated floors, to drift. The local definition of a blizzard asks how horizontal the snow
falls. Green and white the red cardinal’s shelter. Gray squirrel, puff-cheeked, clutches the
topmost spruce bough, bouncing in the wind, to reach the tree’s last cones. Rabbit tracks
dash lines between trees.

a quiet rest
in between mountain hikes,
the trailman’s lodge 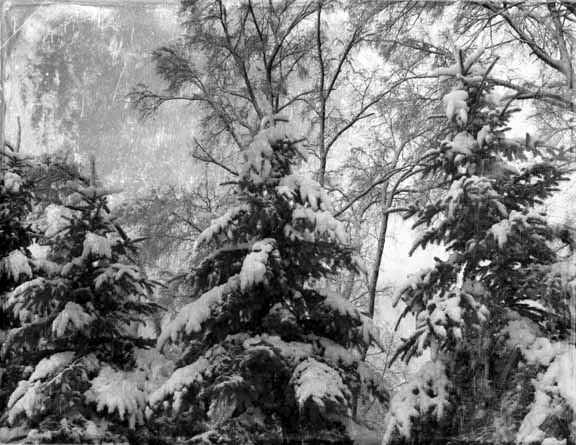 Seeking a festival more quiet, more contemplative, the old poet ties up his knapsack, goes
out into the snow, boots laced high over wool, hat and mittens braced upwind. Any
direction as good, in this whiteout. Where the road shelfs over the cutbank of river’s loop,
he stops to watch heavy flakes streak through whipping blackoak branches across the
oxbow slope. Memorizing calligraphy of lines of trees clouded behind snow, because too
cold for inkstone and brush. Flakes tick on already frozen drifts, winds hiss the boughs,
somewhere off upstream a bluejay shrieks. All other silences converge. Walking stick and
knapsack, uproad, vanishing. Fade to white.

line of footfalls lost
under fresh fallen snow,
no one left to see 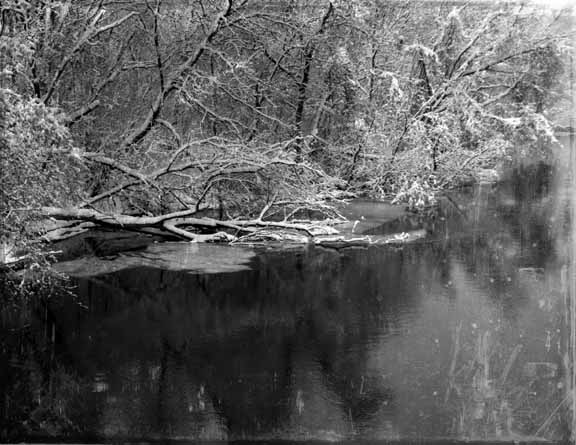 I should own at the outset to a delight in Haibun, that fusion of prose poem and haiku that I first came across in the work of Gary Snyder. There’s much in this piece that reminds me of Snyder’s work, but the nature of Haibun is such that such nods and winks to the work of others is not unusual. After all, the focus on simple language blended with an attention to the detail of natural elements is almost compulsory, as is the autobiographical nature of the piece.

An additional layer for the poet here is that of winter, for surely the seasons are amongst the most common topics for any poet to write about. So, an autobiographical piece stuffed with nature and winter that relies on detail and simple language… the challenge is to bring something new to this particular party.

Part one gives us the time. It’s a rich panoply of images, mainly natural/animal, though humanity intrudes in the opening and third sentences as if we are to be reminded that this wilderness scene is inhabited and thus not entirely wild. Yet we know that we are set in winter.

The first haiku gives us the place. A place of rest and recuperation, a place to see out storms, to warm bodies against the cold, a place of observation rather than involvement. The poet has stepped not out but away for a moment.

Prose poem two gives us a sense of purpose. Until now, the poem has been a record, but now the poet is active again, busy with intent. Now we find a concatenation of language, words bound together involuntarily, sharply. Phasing tends to be snappier.

Final haiku restores everything to pristine, to silence. The snow remains.

If I have a complaint it’s about one phrase – ‘Fade to white.’  Feels like an overused trope, and a quick on-line search bears this out. Besides, it’s a line I’d expect in a tv/film script and the interpolation of an alternative modern art form feels intrusive. What’s more it reduces the second haiku to a cast off throw away.  That haiku means precisely the same.

But it’s a minor gripe.  The piece is clean and simple, heady with rich images. It moves me as the reader. And to paraphrase Sean O’Brien – poetry isn’t about understanding, it’s about the experience of the poem. Well, here’s a poem to experience, and to my mind, reading Haibun is about the experience. And that’s why I fell in love with Haibun in the first place.

(p.s. try reading this aloud. Let the words hang heavy on your tongue. Savour them in the mouth. Consider every phrase as you deliver them and if you can, watch yourself in a mirror as you do so.)