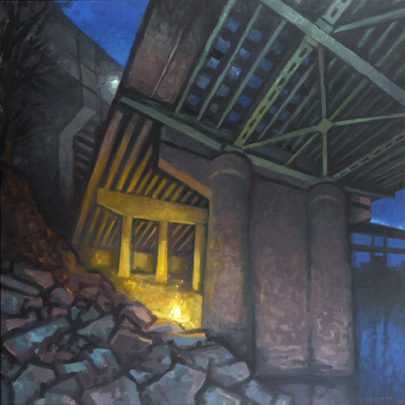 Altar with George Carlin album, flattened tin can and Donald Trump’s toupe
On the matter of stuff

It’s no crime to be Donald Trump–
It’s not a crime even to die
for stuff, but it’s a crime to be
homeless. If you don’t believe me
try trading your three piece or silk
chemise and Jimmy Choos for an
army jacket, torn jeans, backpack
then walking to dinner with friends
on the wrong side of the unblessed
street– try diving without scuba
gear behind the Radisson
or smoking by the railroad tracks
without your ID, washing
windows without a permit
piling all your stuff in a shopping
cart and wheeling it between F
and G at the midnight hour, or
try sleeping under Perseus
showers without a license; try
dreaming under an unauthorized
trestle– wild stallions, windfall pears
empty bird cages, untranquilized
lions guarantee a boxcar
of unposted bail.
Try the flamingo or child’s pose
in Courthouse park if you’re recognized–
if your name is on the list.
It’s all a matter of which side
of the fence you sleep on— which line
you step over—which shiny star
you piss off, or maybe just
possession of fraudulent zip codes.
It’s no crime to be Donald Trump
It’s not a crime to die for stuff
unless it’s stuff unsecured by
Turner or Yale, a paper cup
of felonious poppies, an
open container of sorrow
a doghouse with no P.O box.