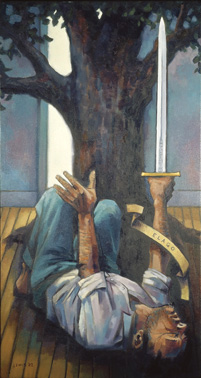 I Was Lucky, David Carmack Lewis

Audio for REVEAL CODES, Part One of Three

Ed’s own comments on REVEAL CODES:

“Reveal Codes. . .”. takes off from Beckett’s “love triangle” play called, “Play.” Most of the quoted “refrains” in “Reveal Codes” come from Beckett’s “Play.” Some of them are lines from that play that I’ve invented. Reveal Codes, maybe obviously, comes from an old word processing command (don’t know if it still exists. . .) by which all the normally invisible codes that format a piece of writing (tabs, section breaks, italics, etc.) become visible on the screen. The poem is a political monologue about a “white” person’s terror of being seen. I think “whiteness” as a social and personal (and legal) category stems from , among other things, the effort to create a situation where people can see but not be seen. It’s an illusion. Vision is reciprocal, I think. One can’t see anyone clearly if they can’t “see you back.” The consciousness of “how one is seen” is, in fact, a crucial facet of self-consciousness. Whiteness is, I think, among other things, an effort to avoid that facet of self-consciousness. A kind of corruption of Descartes, “I think I am how I think I am.” Or is that Seuss? Anyway, in “Reveal Codes,” our speaker is now intensely aware of being seen politically, philosophically, and, in this case, by a lover. It’s a close up of how his awareness of being seen alters what he sees, all the way down to the lover’s pupils that constrict when they fall upon the “bright” object, etc.