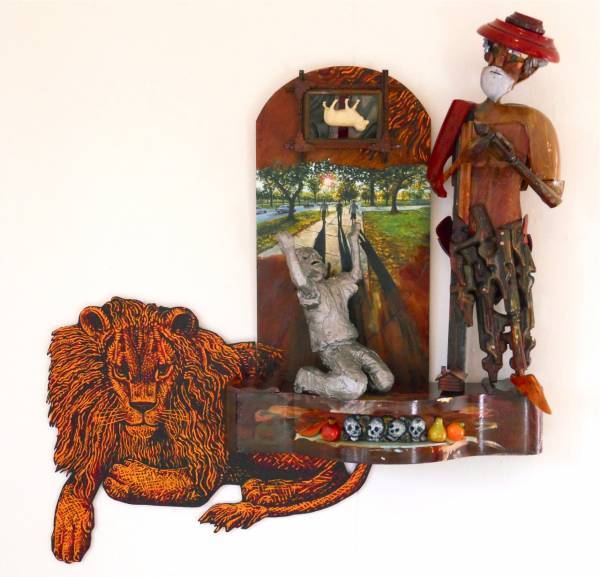 David Appelbaum’s new chapbook of poetry, Jiggerweed, contains a poem, Advice to a young poet, which begins, “Don’t start with a no,” and ends, “don’t end with a yes.” He advises further: “make no evil with this/ charm I give you…

The implication is that a poem is not only a powerful thing with built-in potential capable of working good or evil on the reader (and poet?), at some level, whether high: “set up a heroic cry/ godly unknowing;” or low: “be the vow that breaks/ the camel back/ of wisdom writ/ on Spam tins”. But also as a poet older, wiser, more experienced, offering advice to one less so, it offers itself as a window or touchstone into how to read Appelbaum’s work. One thing it reveals is a consciously and unapologetically metaphysical sensibility.

Steve and I both agreed to read and review David’s collection separately, partly because David graciously agreed to sign and send us both copies, but also I think in a gentle kind of competition with one another—not one-upmanship but because I think, as poets, we are both trying to figure out and navigate this thing called criticism. Should we ever be negative, or always pointing out only positives—should we be honest? What obligations and responsibilities to poets do we have? To the poet under review, and to readers? Is reviewing to sell (promote), interpret, or persuade a readership to our taste? Old questions whose answers may vary according to context.

Well, honestly, I find David’s poetry difficult, minimal to the point of abstraction sometimes, and I wonder and ask myself if he is withholding, holding back, and if so, why—what does the effect or strategy achieve? David ends the chapbook with a poem called, “Truth,” which has 35 words in 11 lines, and even though he isn’t saying much (in quantity not quality), the poem is about saying (or not saying) as much as it is about truth with a capital T. In other words, does ‘truth’ change over time, or can it become something else, something harmful if it is spoken, “once with like/once with must”?

beyond deceit even
isn’t evil
but none, no
truth but isn’t
if once could say

What? The poem opens with the title, “Truth,” and the first line a continuation of it, “ruins so much.” What kind of truth are we talking about here, something subjective and internal, or something objective and outside? Does the damage occur when it becomes internalized and thus changed, or when it is moved back outside from within and uttered in language or poem? These are difficult questions, and not made any easier when less, or so little, is said rather cryptically. But maybe David evokes more mystery, a necessary mystery, for such a complex concept by saying less—we have to ask where the source of corruption comes from:  is it Truth that’s flawed, or is language a corrupting influence, or rather is the apprehending mind that merely frames thought in language the source of corruption?  How can we ever be sure, since as with the cosmos and the mind, we are inside the system and cannot test guesses from the outside?  Also within the poem there are complex interplay and multiple ways of reading and meaning through the enjambment. In order to say, is it necessary first to understand? And so much has been said throughout history already. David understands that poetry can be a dangerous thing, especially when you start talking about Truth. Maybe this is why he’s not saying a lot—too much? I find it funny that he ends his book with this piece. Deep philosophical waters. Perhaps this poem, placed at the end, at the completion of his selection, is a private joke, a gentle jab at himself or a serious injunction to himself or readers.  Maybe I’m reading too much into this, but the poem also appears on the back flap where blurbs commonly appear, enabling it to appear twice, and also at the beginning of the book, since most people check the back of a book first.  If it’s humor, it’s an uneasy humor, or one with a sting—truth isn’t simple anymore, even for those who may believe in it or take it seriously.  And I think David is a poet who does.

Steve and I had brief email conversations, not wanting to tip our hands. His argument is that David isn’t withholding—that that would be a nasty mind-game. He says, “I think he’s just doing his best to convey his sense of the miraculous and what, for him, is a kind of spiritual reality… or you could create an abstract sculpture to suggest a revelatory state. I think that’s kind of what he does. Revelation, whatever it is for each of us individually, can require all sorts of deformation, by definition. If it was just easy stuff then it wouldn’t be very revelatory.”

This, if true, sounds kind of exciting to me, and I like his idea. Miraculous. Revelatory. Now I’ve got David and Steve trying to help me read and understand (review) David’s poetry. Ha, what fun!

David opens his book with a few poems pertaining to celestial bodies, beginning with Minerva at dusk flies. The first stanza points us to the Owl Nebula:

Implied or implicated is the Greek mythology of Athena’s owl (Minerva predating Athena several hundred years but evolving into the same deity as one people supplants another), which fits seamlessly since constellations are so commonly classically named. Minerva and her sacred creature the owl are stand-ins for wisdom (and poetry). We get the reeling image next of stars falling like eyes out of sockets as they circle the sky while Carl Tubbs, the astronomer who discovered/named the Owl Nebula, watches them through a telescope.  He works in solitude at night, “the horror of dawning down/ he is child of the dark/ tree stranded on the stand.” Then a turn is taken and it sounds as if the crucifixion is being described or at least referenced through the mechanism of the arcing telescope:

In this poem Carl’s sacrifice, his solitude and hard work for the cause of science and discovery, not pride, echoes Christ’s sacrifice, an innocent suffering a criminal’s death sentence, nailed to a tree.

“Dust in Leo,” is an exquisitely elegant conflation of the Frosty Leo Nebula with an aging man. Within the constellation Leo is a nebula made of dust shed from an aging star like our own, which contains proto-planetary material dense in water which could actually be the beginning of a new system for a water-rich planet to carry on a cycle of birth, destruction, rebirth.

The last poem in this outer space vein is “Colossus” in which he dissects the hubris of humanity by comparing a pre-launch ‘beaked’ spaceship to Beowulf’s monster, Grendel, and in a sublimated way later implies it might also become the knight (ship as armor) that slew the monster. Each stanza has one or several “i” end-rhyme assonances. In referencing Beowulf is he comparing the pride of poets to astronauts? Much of the humor in David’s book is wryly subtle self-mocking jabs like this embedded throughout.

The dictionary tells us interestingly that a jigger is “a machine or vehicle with a part that rocks or moves back and forth”—like a poem in lines, or poets as they read their work. There isn’t a lot to be found on jiggerweed on the net, just that it’s a plant of the plains also known as “pleurisy root,” which, judging by the image of the seeds pictured on the cover, are the kind of stickery thing that adheres to one’s pantleg or hide to be transported over distance. Apt, but gently self-deprecating metaphor for this collection.

There are 20 poems in Jiggerweed, and I haven’t even scratched the surface here.

David Appelbaum opens his collection with an epigraph from Borges (“The Library of Babel”) as a frontispiece, “There is no syllable one can speak that is not filled with tenderness and terror, that is not, in one of those mighty languages, the mighty name of a god.” Given all that’s been said above, David’s ‘little’ book seems to echo this sentiment of tenderness, terror—maybe even awe at the undertaking (of poet/prophet/witness?). David isn’t withholding—he’s humble and perhaps even daunted by the task at hand. He is scrupulous, and there is a kind of care induced by caution, mixed with humor here, by one whose dealings are with intricate and costly systems. I’m glad and humbled that I was offered the chance to read and study this collection, and will be turning and returning to it long after this review is written. It has a character I find similar to scripture, in which I can come back and glean something new from these poems each time.