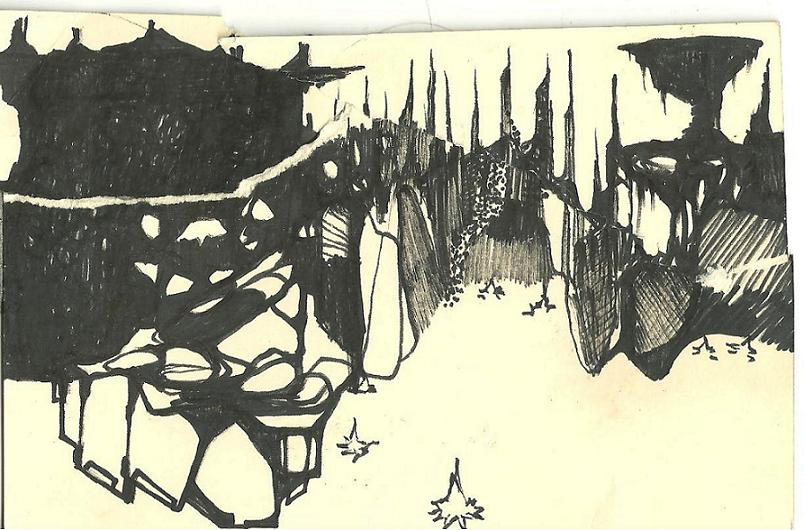 i.
We’ve seen armchairs yarned in factories
as they take away great grandmother
with cancer of the lungs, a string of long
fluid woven into her assembly

apt for a tapestry, a long room
that is woven of her memorized thread of choice.
A Volta television swamp floats until breath emerges

gentleman like, heated from its length of rope nerve.
Six looping pythons in one belt

The radio has got to quit following people
into my secrets

– I have seen the evidence of other shadows doubling
with these voices on the radio.

Marquis Sylvania, an albatross equilibrium. Harsh bone
puzzle hands twinkle down, to plant
a Hammond organ growing from the soil

He can play very well,
his fingers ripe, his hands
potatoes,
a harm of fire towers
giving birth.
The year is reconsidered
from a palace in the rosemary

ii.
A fragile, breakable exhale comes in
through a python repetition of half eyes.

The silk in my feeling
is spinning anchors –
one way spatial relations,

a low cloud stripes up sticks,
a life can be a lovely beginning.

A lewd, distracted light emerges,
I am resting the speaker to your velvet thigh
all rosemary arranged in radio, red language.

In my review of Zach’s previous poem, “Washington county outdoor school,” I used the comparison of his work with abstract painting to create impressions, evoke mood.  I think with “Cur.tain” the comparison should be changed to a weaving or a tapestry  where words are colored threads. The poem after all is titled, curtain, and contains a variety of curtains or opaque surfaces used to conceal windows and views to the outside world, such as the TV, which when turned on changes from a blank inanimate screen to a window to worlds and lives or stories of people in other places. There’s also the curtain or veil between life and death, more like a door, or the curtain of  language which conceals and reveals meaning through connotation between and behind words, or likewise the poem as artifice itself in regards to the poet and audience, and as mentioned repeatedly in the poem, a mirror, which reflects reality back to our eyes through the curtain of our minds which filters and processes what we see.  “Half-eyes?”  Or in section iii, the mind as curtain processes wrongly what it hears in paranoia as the speaker fears the radio is after his secrets. Sometimes a curtain is opaque and other times, as in the central poem metaphor one can see through it, but imperfectly to the author’s intent, or as with tapestries it becomes a window where nothing but wall was before. Poems can be like mirrors, “one way spatial relations” or perhaps two-way, after a reader gets involved, and looks through it back toward the poet, or at least to the speaker in the text. Some poems can be a “mirror maze.”

In some ways “Cur.tain” is an easier poem than “Washington county outdoor school,” as in more transparent, because there are more breadcrumbs of meaning and loaded association dropped along the way through the disjunctive words and phrases, but in other ways “Cur.tain” is the more difficult poem and perhaps more heart-wrenching, because one could just google words and draw associations and there didn’t seem to be nearly as much at stake in the previous piece. I think the key to understanding this poem is in the line, “(hours) plastic touching      our childhood,” and realizing that the speaker is an adult reflecting on and from a state of past childhood. Underlying the piece is the threat of losing innocence, or the fact of lost innocence, and with ensuing sadness and confusion. The line I quote could refer to hours spent practicing the piano or organ, except for the use of “our,” which includes all of us, means we live and grow up spending hours with plastic; something artificial, not true life or living—another curtain? The organ or piano is a metaphor surreally extended and developed and becomes a trope which heads off in nightmare directions as if drawn from a David Lynch movie, or mania.

Another motif is the world or life as swamp, beginning in section one. The TV as swamp, maybe in how it inaccurately reflects life, muddies the water, narrating to a woman hooked up to life support machines and tubes, dying in a bed and oblivious, no longer conscious of its lies, but the poem’s speaker, by the bedside, is. And, later, in section iii, which comes out of order before section ii, speaks of, “The shouting, undressing      old pin point swing set singing      a shallow end of the swamp.” Shouting and undressing is something adults might do, someone riding a swing set would probably be a child, but we are told this is the shallow end—maybe because at least it’s real life interaction and not reflected through some intermediary or medium (if we ignore for a moment the medium of the poem).

Another recurring thread which bookends the piece, again referring to the swamp line in section one, are the parallel lines and themes here:

“A volta television swamp floats until breath emerges” from section one.

“A lewd, distracted light emerges” [from the swamp TV?] from section ii, which actually comes last…

Then tying in with breath and light emerging, from the earlier section of three are these lines: “A fragile, breakable exhale comes in/through a python repetition of half eyes.”

Python and breath echo the first section. Pythons live in swamps and kill by suffocating their prey through the ever-tightening grip of their coiled bodies.

Somehow despite this bookending, the poem still manages somehow to end on an uplift, with lyrical beauty, because even though the light that emerges is lewd, the speaker is “resting the speaker to your velvet thigh/all rosemary arranged in radio, red language.” One doesn’t know if the speaker is referring to a television or radio speaker or whether the velvet thigh belongs to the great grandmother or perhaps a lover from section iii. What is clear is that through the use of a speaker the poet is trying to amplify and break through the curtain or whatever is impeding communication and transference of meaning (even if contaminated), to get beyond isolation to community, communion, to purity.

The poem ends with the word “language”—not “mirror maze,” which if the poem were sequenced numerically and ‘correctly’ should have ended the piece. Maybe poets can make a difference, can bring about different outcomes by messing around within their medium

—for others who find the medium/artifact, or at minimum for the poet themselves? Surely this is a major reason why we write? Dean Young says in his book, The Art of Recklessness, “Poetry’s greatest task is not to solidify groups or get the right people elected or moralize or broadcast; it is to foster a necessary privacy in which the imagination can flourish. Then we may have something to say to each other.” Perhaps writing is not always or only discovery but a way to free ourselves and for the reader as spectator a form of vicarious transcendence too.
Review by Greg Grummer
We’ve seen armchairs yarned in factories/as they take away great grandmother. A strange start to a peculiar poem. Grandmother conflated with an armchair factory. Do I believe the narrator and some unnamed companion/companions saw an armchair factory as great grandmother was taken away? It doesn’t seem likely. Either this is a vision evoked by the grandmother’s departure, or the grandmother, herself, is the armchair factory. As the poem continues on, I begin to suspect both are true.

The first task for me when considering Cur.tain was to mull over the periods or dots that break up certain words, including the one word title. I tried various strategies. I tried to consider the unique sections the periods created as words in and of themselves. I looked at them as art, as if the words so affected were paintings. I considered the nature of the period, its various functions, from end stop, to decimal point, to pool of ink. None of these considerations brought me total enlightenment. All of them helped me to internalize the strategy. I can’t say that I’m thrilled about Zach’s use of the period. I’m not upset by it either. I just am not sure what to make of it. Perhaps as I read more of his work, more thoughts on this will evolve.

The poem has a curious movement or propulsion. Rosemary, a plant mentioned twice, seems a huge clue as to what’s going on.  Rosemary is known as the memory plant. Its use stimulates the power of memory. “All rosemary arranged in radio, red language.” to quote the poem’s last line. Red language; language color-shifted towards the end of the spectrum we’d be color-shifted to as we speed away from an object, if I’ve got my physics right. The poem’s narrative is infused with the shifts and distortions typical to memory, or dream, and then additionally redshifted by the effect of moving away from the great grandmother in time. It makes for a narrative of sorts, but not one that tells a coherent story. Rather it’s a story of emotion-generating images, strands of past roped together like the belt of pythons the poem references, or like the various patterns woven into a the tapestry mentioned in the opening stanzas of the poem.

The memory conceit is further accentuated by the progression of the poem from section i to section iii to section ii, the concluding section, jumping in linear time as memory and dream often do. The iii section coming in the middle of the poem, seems a journey into the deep past of the great grandmother, and into the past of the narrator and the narrator’s companions, perhaps siblings of the narrator. There seems to be a man who figures prominently in this section, perhaps the great grandmother’s husband. This is all highly evocative, and helps to combine the various images of the poem into the coherency of a life if not into the coherency of a story.

“our mice neighbors twinkle fingers up”

As I read the poem and am struck by its emotional power I feel as if I too am being woven. The action of remembering starts up in me, at first without my having any memories. Then there’s my own grandmother’s bedroom, her bureau with the mirror and clock on it. There’s me as a young child visiting my own very old great grandmother. The images don’t come back to me in a story, but as individual creatures, possessed of their own kingdoms, unattached. Any story I might make of them would be much like the story in Cur.tain. For instance, what am I to make of the confluence of Volta and Sylvania references in the poem, two electronics companies, manufacturers of televisions and radios. This intrigues, but even extensive googling can’t trick out a definitive narrative to satisfyingly explain their presence. Was the narrator’s historical family involved in either of these enterprises? Or was an old television or radio, or both, a prominent fixture the narrator remembers being associated with his great grandmother? These facts are gauzy, and yet there’s a coherency to them that hints at but doesn’t reveal a narrative, much like my own memories would in the mind of a person unacquainted with me. This has an odd, powerful effect on me which I find delightful.