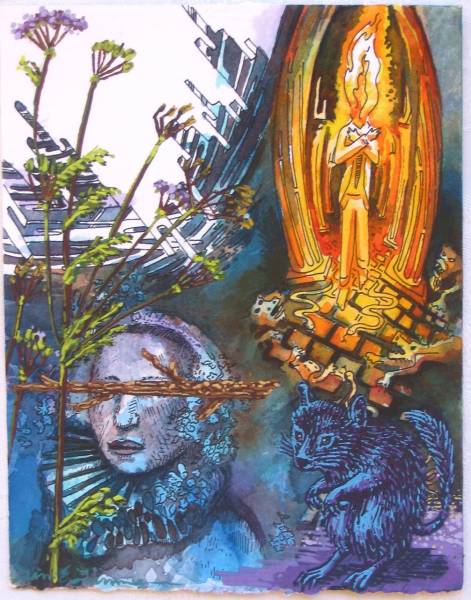 bewitched the way your shadow
breaks with the past, is absorbed
and once in the ground, nourished

half at your side while the night
in its sudden joy becomes a morning
you never heard before.

Sometimes poems wind up to a high note of joy leaving the reader behind somewhere, trying to catch up with the emotions in the poem. This poem, if anything, illumines. It talks about the sun, and it talks about the moon, but it’s not a tired female moon—male sun axis at work here. A line like “since your shadow comes from the sun/ it starts out as silence” effectively yokes together the human and its animistic principle or the star and its daguerreotype. The past can also be the sun-showing the way forward, but only through suggestions and sudden joy, ripening this life endlessly. Coming back to the line I quoted earlier, I couldn’t help but search out this bit.

The Sun’s acoustical waves bounce from one side of the Sun to the other in about two hours, causing the Sun’s surface to oscillate, or wiggle up and down. Because these sound waves travel underneath the Sun’s surface, they are influenced by conditions inside the Sun. So scientists can use the oscillations to learn more about how the structure of the Sun’s interior shapes its surface.

Not saying this is what the poem talks about, but that notion of the shadow starting out in silence, out of that enormous reservoir of energy is something that needs to be realized properly, on its own terms. And then there’s the brilliant line break at:

and once inside your bones
even more restlessness

There is such a delicious mixture of experience and poetry here. The easy way out would have been to equate the evening to death. But there’s more here—in this internalization of more than nature—more than giving into wistfulness, there is also the connection—the evening inside your bones being ripened into death and spoilage and then again ignited into new organisms. It’s not only a question of facing up to a new day. It is also about being a part of it by life’s very nature and lived-in ness.

My sense of enjoyment from this poem comes from the way he uses sun, shadow, light, growth, knowledge, etc, in ways that for me are unexpected, or don’t align along typical fault lines that these ideas usually provoke. Light and dark aren’t set up as negatives or positives. I don’t get the sense here that he’s reacting to some rationalist(sun)/spiritual(moon) divide, or romanticist versus realist, etc. As one who hangs out with Jungians, and is privy to some of their concerns, the notion of shadow here and the Jungian notion of shadow, though not in total synch, do seem to be speaking to each other.

I like the assurance of the voice… it has nothing to do with flames… and the structure of logical argument in the service of something beyond logic (i.e. the logical construction)… but since… therefore (not stated, but certainly implied) in their service of some proposition that seems outside logic.

We follow the action of the shadow throughout the poem, and its relationship with light, but also the sun itself. The sun seems to be both the progenitor of the shadow (here, I’m unsure of whether the — before sun in the third strophe is meant to indicate a parenthetical statement, the last two lines of the third strophe meant as parentheticals to the ongoing discussion of the shadow, and so the fourth strophe carries on with the discussion of the shadow, or is the fourth strophe a further development of the sun image, so is it the sun or the shadow which is bewitched?) and well, oh, I can’t follow this logically, but the action of the shadow throughout is intriguing. The notion of the shadow going underground for safekeeping ties in with the notion of death itself, how going underground, to death, is a sort of safekeeping for the soul, perhaps, and from the relentless ‘becoming’ the sun represents.

This notion of relentless becoming is a critique I bear against Jungianism. Jungians believe that there is a perfect us, and an ‘us’ us which is less than the perfect us, and that it is our job to actualize the imperfect us into the perfect us, or become the us we were meant to be. So I thrill to what I take to be a critique of the sun and its persistence in wanting us to become something else, our perfect self, perhaps? Possibly the poet doesn’t mean for this to be a critique, but I read it that way because it gives me pleasure to do so, and isn’t disallowed by the poem, if not in fact authorized.

You know, surfers don’t surf so they can get to the shore. They surf because they love the process of surfing, just as writers don’t write poetry to get to the end of the poem, they write because they enjoy writing. The end comes about because they feel they have to stop. So with this actualization business. I don’t live my life so I can become actualized. I live my life because I enjoy what’s involved with living. The process of my senses bring me joy. I’m not necessarily going anywhere.

This poem is taking opposing values, sunlight and shadow, and melding them, displaying them not at odds, or as carriers of negative and positive values, but as autonomous actors in their own right, existing not as placeholders for some debate about good or bad, or right and wrong, but as themselves. In this time of continuing fracture and division into opposing camps, where every metaphor, image, or symbol is a temptation to proselytize, I love the fact that this poem is a charm or talisman away from that type of thinking. To the extent that its rhetoric could stimulate any sort of replication in the larger body, well, I’m doubtful, but why not let it try?

Simon Perchik’s poem gathers up all of the relaxing curves of the earth and makes them calm, inquisitive delicate moments we can view in a most casual way. His eye looks through a blurred glass at a Sun, and pulls from it the intangible. He attempts to describe this intangibility.

The turns in the poem are smooth and I picture myself reading in the library.