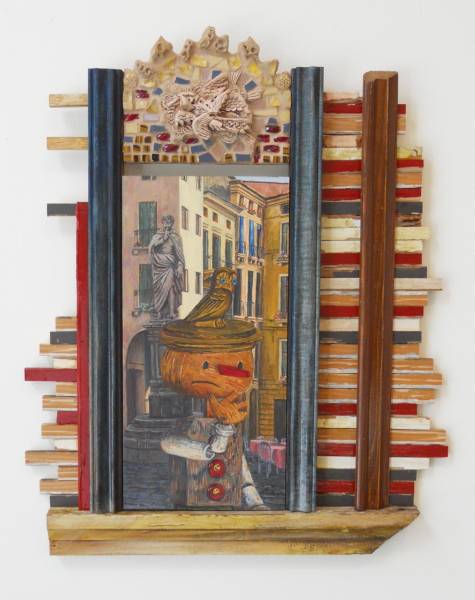 The train pulls away from the station.
Or maybe it’s the station.Loose in its socket, Earth hinges on the sun.Socrates abhorred writing, its corruption of memory.
An amputee reads into his prosthesis his missing limb.I’m thinking of the Marine who lost his leg,
who wants to go back if the Corps will take him.

For apple the children touch a fist to their cheeks
and give a twist. Some have mistaken green and blue
butterfly land mines for toys.

Speakers of geographic languages describe their experiences
in relation to the cardinal directions (when I stepped north
my leg went east), and

when they point to themselves they do not mean themselves
but the direction that passes through them.

The title of Central Terminal is an oxymoron. We are at the center and the end at the same time. It also introduces a conceit, that of the railroad. It turns out this conceit is a framing device, mostly forgotten in the middle of the poem, but a frame can’t help but influence how you see the picture.

Now the meaning is quite clear. The first line assumes that the station is stationary, that the train is in motion, that the train moves itself. The second line exposes all that by saying maybe the train is the station. But the poet’s phrasing is not so clear, putting more emphasis on the “maybe.” The second line comes off more like a mumbled afterthought. This is the sort of thing that rarely survives poetry workshops. It is also the sort of thing that breathes life into a poem by giving it a voice, by creating an experience of thinking that the reader re-creates.

Line 3 is not a mixed metaphor. The Earth is in a socket, and the socket is on a hinge. In other words, the Earth rotates *and* revolves… reminding us of the utter absurdity of geocentrism. An intrusive new thought, but the theme of centering remains.

Line 4 is the next intrusive new thought, and a bold leap away from the main theme, a leap that will transform and complicate that theme. Socrates abhorred writing, yet Plato would write of him, and this writing would immortalize him. Socrates is the “center” and writing orbits around him, as though his abhorrence creates the distance that makes orbiting possible.

Then the poem just blossoms from there. The leg missing from the Marine, the Marine missing from the Corps, the core… and from there to apple. The children’s gesture brings us back to the rotating (twisting) earth, which then becomes a green and blue butterfly, and then a bomb.

The next stanza on orientation is a natural extension of the theme, which then leads to “direction that passes through them,” tying the theme to identity.

Finally, we end not with closure but with a beautiful image, or rather a non-image, the train gone, the poem over. The center didn’t hold. The poem fell out the window and we are left holding its feathers… but there’s nothing slight about this poem. It’s a deep, spiraling meditation.