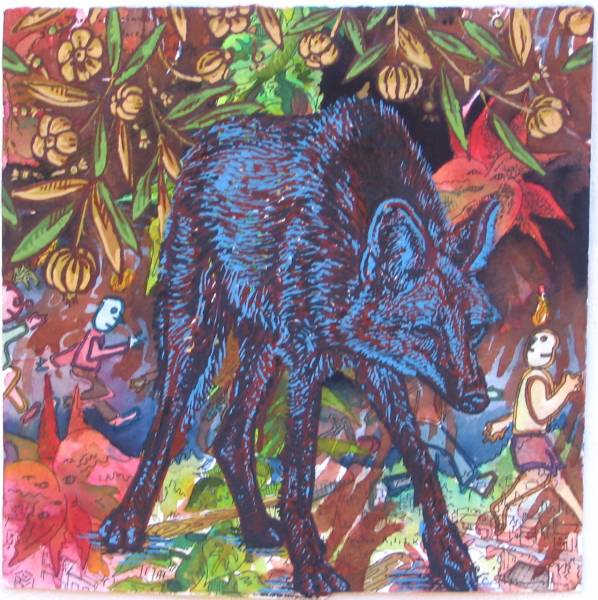 Some Giants are Really Your Friend, Tim Timmerman
(ink, watercolor, and gouache, 8″x8″)

To fall in love you need to be willing
to believe in ghosts and to know
the wild perfume of the implacablebeast, the insouciance of the untamed

girl. Words have scents like flowers.
Honeysuckle and harebell, desire trailed
me and in his madness threw me
from a cliff. I wander the high fells

neither to conjure up his drowsy shade

nor to perish alone in the fierce tempest
of love, but to once again go out gathering
garlands of moonbeams or lightning.
_________

*      *      *       *       *
Review of Laurie Byro by David Appelbaum
Laurie Byro believes in ghosts.  Ghosts come alive in her poetic vision, or more exactly, her vision, like Godiva’s ‘diaphanous white shift’, contains the very ambiguity of the word shift.  It is both the fabric that veils the spectral thought—preventing it from appearing in its apparitional nudity—and the slight transformation that occurs when one takes in the ghost, that is, confirms that it is there in its absence.  The ghost, like a death-wish, is repeatedly disavowed, as in ‘Weasel,’ where she states, ‘I don’t want to admit that I want to die first.’  What returns as a revenant?  Perhaps ‘a symbol of some other god,’ perhaps Hermes, god of thieves, who would help in the project that lies in ‘waiting to steal your breath’, perhaps a muse dear to the poet who is ‘poised as I was to write it all down, leave/my own blood mark.’  The work is also a shift in the sense of exchange: to replace that faint movement of thought for blood, the life-force.  The specter who inhabits the outside, which may be a ‘poison garden’, is a source of messages from the world beyond that somehow constitute the work of the poet. Only through its relation to the night, the land of the dead, can the work be engaged. Of course anyone can write, and there is always one’s journal, but it ‘is not free enough to talk’ since it chronicles and writes history whereas poetry is conjuration:  most exemplarily, ‘out father conjures/filth around me.’  Such words as are called up from a ghostly language, murmured without sound—no acoustic—must be forced ‘through their crystal glass’ as they continue to speak in their breathless way. The finest sand, heated to liquefaction and cooled to form a vessel (perhaps a bell jar), is the poet’s instrument of choice.  Speaking thus with death, in the tongue of death, calls forth the impossible transcription into our language and calls into question the ‘old story’, whether it suffices merely to be repeated:  the prayer that asks to be liberated from ‘a promise of oppressive love’, which Byro articulates in fine fashion:

In gibberish I plead,
release me, like a fish into those seas you cannot fathom.