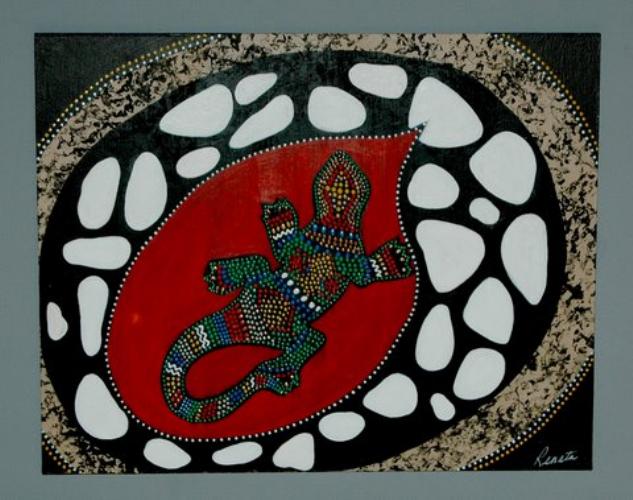 I  found a scale
in the crook of my elbow,
on the softest flesh,

and another on my ankle yesterday
in the shower.
Soon they’ll fit like chainmail

or a blossom of salty wounds
crusted into a clean, dry coat.

I’ll go where it’s too hot
for others
whose senses still coat them like vinegar.

I’ll cease to blink, my vision
will clear and harden,
my gaze dim to green

I’ll change my colours
from mango tree to patch of weeds
wherever I go.

I’ll scan rooms with my sliding eyes,
hide from others,
watch the sky constantly

things will become
only good for me
or bad for me

until I could muse upon
what I must
without having to weep.

or even detect
it, except
on the flick

of my rank tongue

To think–
and I can’t imagine–of this city

under a fascist rule. Hard
to put the there and here together. Just so

on camera that people seem to want
to think are fake. Thirty years ago

knocking on hardwood. Some say you can still
hear the footsteps of the vanished within this very bar.

What shit. Even the footsteps have vanished give me
another glass of good red.

Bark bark dog
barks at nine every
morning and bang

their yearly big bang, it lifts me
from sleep, the almost physical
insistence of regular sounds

that slam around
our courtyard. Always
one noise followed

by one noise
means pattern
means another sound

then another, like fence posts
in those rabbit fences visible
from outer space which stretch

into the paradises
of Australian distances.
Each bark, each whang

proves echoes
just a rueful laugh
for the last sound that never came.

As if every living thing hopes somehow
to keep living, beating out time
like a blacksmith on a copper ring, forever.

*     *     *     *     *     *
Review by Pamela O’Shaughnessy
Chris Crawford puts a clean, dry coat on his poems, like the reptile’s new scales in his poem “Lizard”. He confides in us, puts on no airs of allusions or vocabulary, draws us in, and lets the deceptive transparency of his style take us into a world of exile and conflict waiting below.

In these three short poems, “What No Longer Exists in a Bar in Barcelona”, “Lizard”, and “A Copper Ring”, the poet is trying to separate himself from his emotions and memories, even if he has to step outside humanity. But as with any expatriate, he cannot stay fully outside; he can’t quite convince himself to forget; he experiences and reveals the emotions he is trying to repress, no matter how he tries to hide them; and he is woken by his brothers and sisters as they beat their drums of life.

In “What No Longer Exists in a Bar in Barcelona”, we are challenged in the title to find what is not in the bar. We are not supposed to be looking for a positive thing, but for a lack. The narrator begins with a curiously contradictory set of phrases: “To think—and I can’t imagine—” We begin precariously, that is, with the narrator trying to understand an event he already has decided he cannot understand. It is the Spanish Civil War of 1936-39, in which the Nationalist forces of General Franco eventually defeated the elected Republican government of Spain, after many atrocities on both sides. For the next forty years Spain was a dictatorship, and during this period rule was by intimidation.

But, sitting at the bar, it feels to the narrator as though that terrible time which ended only thirty years ago can be and has successfully been forgotten. He tells himself that Spain has recovered so fully that there are no signs at all that the war and the Franco government ever existed. The blood of this history has been diluted into the river. In fact, people want to disavow that time—they want to believe the evidence of violence and terror “are fake”.

Even so, some others keep remembering. They insist that there still are “footsteps of the vanished”. The “vanished” may be the victims, but may include a much larger group, all the players in that drama, from oppressors to the victims to the silent witnesses. Are these footsteps still in the bar in Barcelona? The narrator is trying to decide. What does he want? To remember or to forget?

The narrator seems to bestir himself, to shake himself from the memory of the young recruits “having their throats slit”. He seems to make a conscious decision, a harsh decision, to disavow that the Spanish past is still there in the bar. What shit, to still hear those footsteps, he tells himself, and calls for more wine.

Though these thoughts seem initially single-layered, the reader begins to wonder, What else is no longer at his bar? Is there another, more personal history he is trying to convince himself to forget? If the Spanish past can be gone so swiftly, so the narrator’s past can also be made to disappear. He makes his choice; not to remember, telling himself that even the echoes are gone. Yet we don’t quite believe him; he’s too vehement, and we suspect he won’t be able to control those footsteps. What’s missing will show up another time to haunt him. He can’t escape the past just by telling himself everyone else has, though he would like for his own reasons to sit in a bar in a foreign city for this moment and pretend that history starts—right—now.

In “Lizard”, a fascinating metamorphosis occurs. The narrator imagines himself changing from a human into a lizard that doesn’t think or feel much. The lizard is described in detail, his behavior instinctual. Decisions become simple, good or bad, nothing in between.

Then, as if even this will not be enough to prevent him from weeping as he muses over what he “must think about”, the narrator decides he’ll go even further: he’ll “implode to a spore of purest fury” which no one can interfere with, because he won’t even be detectable. But he can still be found to those who really look, by three signs:

Is this magical reptile a basilisk, a creature so dreadful it kills with one glare from its eyes or by the venom-trail it leaves? What is the reason for the encapsulated fury the narrator feels? One thing is sure: this creature’s hurt and anger are of mythological proportions. Crawford takes us no further into the reasons behind this state the narrator finds himself in; the poem only shows us what the narrator is driven to in order to process it. He will hide in shapes progressively farther from the human, right down to the level of a “spore”.

The narrator has told us how he will hide his situation so that feeling will not overwhelm him, but in the very act of writing this poem, the poet and narrator seem to paradoxically join forces to try to defeat this purpose. The poet/narrator becomes an unfeeling lizard, but the lizard writes the poem! It uses its three revelatory tools in doing so: writing it is, of course, a “flick of my rank tongue.” The poem displays “my horrifying logic”, too, describing a man becoming a lizard which becomes a spore which becomes a lizard again. The result is a creature with “wooden eyes” behind which we know is concentrated fury.

Why is the poet/narrator revealing this hiding process, and himself, to the world even as he hides? It can only be that the poet/narrator wants his torment to be known and understood, but at the same time is not ready to experience it. Many if not most poets sometimes write cathartically, but this poem does the opposite: it holds back any catharsis. The act of writing and describing and explaining takes the feeling to the left brain, distancing it from the well of emotion and sparing the poet. It is in the writing process, as well as in the poem, that the poet hides.

“The Copper Ring” repeats the motif of a gradual pulling back from the pain of human existence. Here, the narrator is “awoken” by the sounds of humanity in the morning, beginning its noisy way through the day. The vivid “bark” and “whang” and “pock” sounds seem relatively cheerful to us at first. It’s nine in the morning, and we are at work and play as usual.

But almost immediately the sounds begin to vex the hearer; they “slam” around, and their regular repetitions become so unbearable that he imagines withdrawing from earth. In a powerful transmutation, the repetitive sounds become repetitive sights: he looks down on them as if they were the endless regular fenceposts of the Outback visible from space. The sounds are compared to another regular repetition, that of echoes, in the end, and there is somehow also a “last sound that never came”. The writing turns ambiguous here, as though some unexpected intrusion has occurred, the sound of a “rueful laugh”.

The last stanza tells us that by our incessant sounds, our repetitive activities, we seem to foolishly believe we can keep ourselves alive. The narrator does not believe this. He has to live with a knowledge that others seem not to possess, that nothing goes on forever, no matter how loud our sound and fury, how much we want it to. But even this knowledge does not seem as painful as what is further implied by his solitary understanding: he cannot join his fellows in their happy delusions; he must bear the burden of the painful truth alone; he is no longer part of humanity.

Crawford’s poems present to us the first stages of the struggle and process of mourning. There is alienation, withdrawal, numbness. Further than that we are not permitted.

Start the weeping, the din of humanity outside the window seems to respond, and don’t worry—you’ll come back to us.