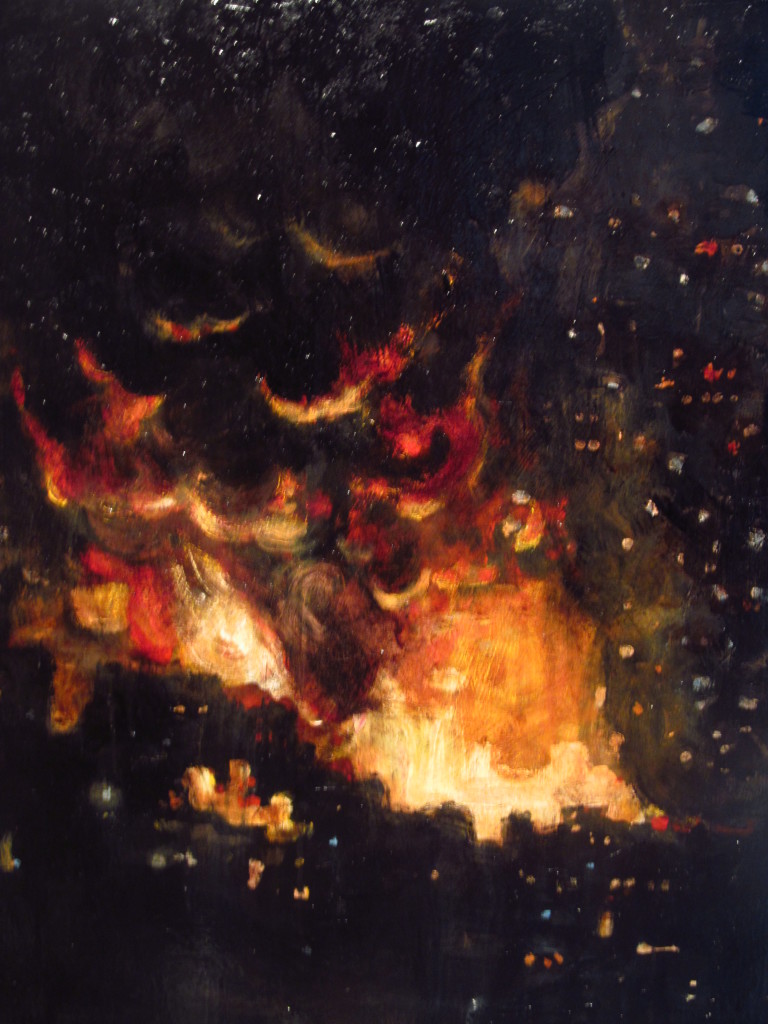 Zero and the anti-dollar

Zero sat still with the anti-dollar in his scarred palms.
The war had begun and the fear was flying through the air like blood.
Zero felt the poison stir in his lungs.
The television was growing fat with virulent statistics, hospitals and fire.
He stared through the screen and imagined
a V-sign projected on the far wall.
The anti-dollar sweated in his hands:
it made his veins thicken with potential.
Zero painted on a mask with chalk; stocked
up on fish and brine sealed in tins; locked
every door and window, and kept a sharp eye
on the gun case that concealed a remote control and two spare batteries.
The war moaned on: the drive to Damascus lit the evening news.
Zero sat at a safe distance, counting the bodies.
At midnight, his doorbell rang.
It was a man from the government.
Zero slammed the door, held up the anti-dollar to the light
and saw the sick, grey face of a tight-ass God.
The anti-dollar fluttered to the floor with a bang.
The next morning he awoke in time.
The air was caked with signals from the television.
Voices struggled for dominance. Zero licked
the ricin from his lips and watched the mouths
move up and down like ventriloquist dummies.
“The rapid advance on the capital is incredible progress,”
reported a mouth to another mouth.
Remembering that the human race is always
about to fall apart at the crucial moment,
Zero suspended the anti-dollar in front of the mirror.
Its image was a kind of truth.
Zero exhaled and terminated the
picture screen. The poison was wearing off.

The political element comes to the fore in “Zero and the anti-Dollar.” I have only a few stylistic quarrels with this poem. “Zero sat still”: if we see someone sitting, do we assume he is not “still”? “The television was growing fat with virulent statistics, hospital [,] and fire”: “grew” would be stronger. “stocked / up on fish and brine sealed in tins”: “tins” implies something “sealed” in them; “stocked up on tins of fish and (in?) brine.” The rhythm of Line 12 would improve if the colloquial “remote” replaced “remote control.” Etc.

These flaws are outweighed by brilliant (but well-integrated) passages. “The anti-dollar fluttered to the floor with a bang” – the paradox in this and other lines recalls “Synthesis,” and the double meaning in the next line (”The next morning he awoke in time”) smoothly achieves a metaphysical overtone. The “anti-dollar” itself seems to be something like the soul, a critical-resistant stance, or the attitude of Camus’s “rebel” (“a man who says no, but whose refusal does not imply a renunciation”) – in any case, something beyond conventional alienation. The poem is narrative, less static and episodic than “Synthesis,” with a more complex structure: Zero (a nicely Expressionist name and figure) juggles the “anti-dollar,” his own “poison[ed]” state, the news (from Syria) on his television, and the malignant television itself – or is himself one of the elements being juggled. The ending is guardedly optimistic. An excellent poem.