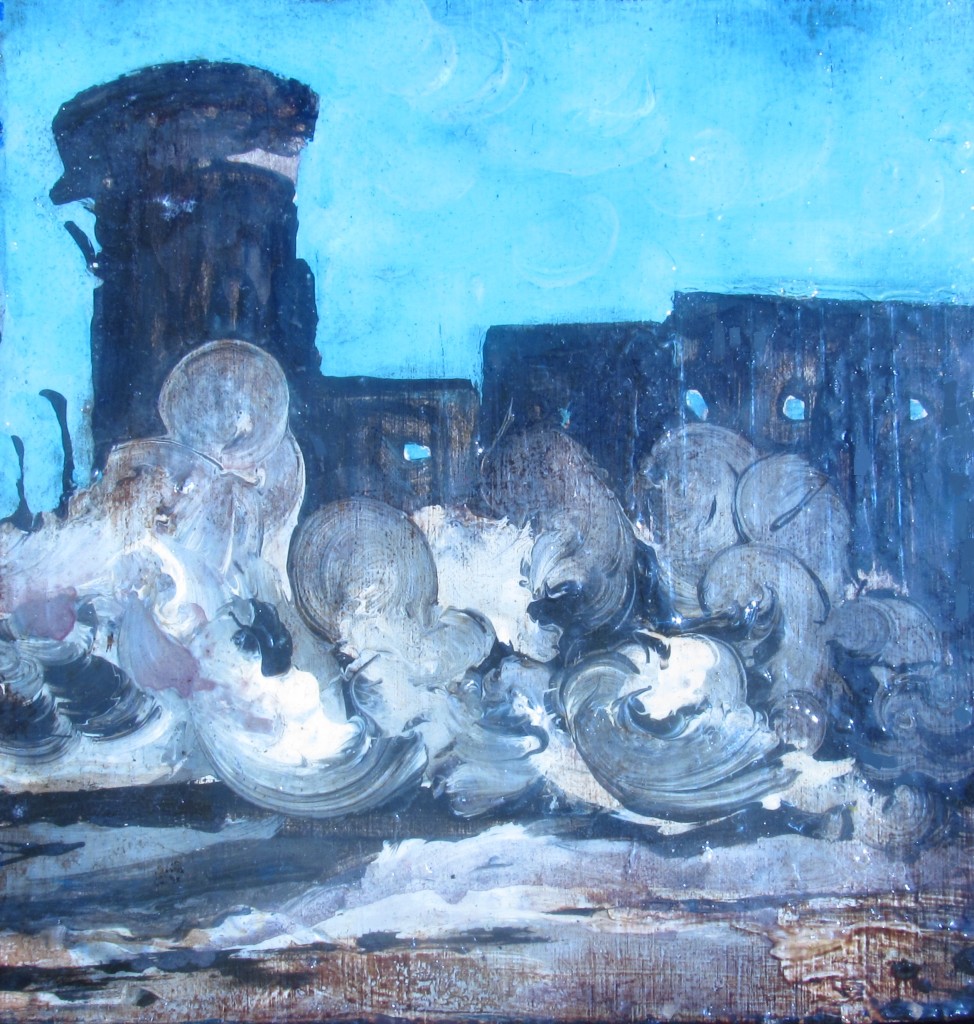 After I tell my secrets I dream of sweeping

With a push broom, I shove dirt
across the garage. There’s just
so much of it, a half inch thick
over most of the floor. Who said
I had to? I don’t think
I’m responsible for all this
dirt in the first place but someone
is going to be irritated
if I don’t. A child, mine,
walks through the pile and leaves
no footprints.

With a corn broom, I sweep
the dining room. How nice
to sweep instead of vacuum, I think.
It’s quiet and rhythmic, and the wood
is dappled with sunshine, except
the light turns out to be dust
and there’s a lot more than I thought
so I sweep faster,
raise a choking cloud,
wake up coughing.

Dirt and dust. There’s just / so much of it, writes Lynn Otto in “After I tell my secrets I dream of sweeping.” Even in a dream, there’s so much. Dirt and dust is the detritus of the world – the waste products of the earth, of the human body. What’s more, even the phenomenon of sunlight turns out to be dust. Dirt and dust also suggest confusion and turmoil, the unwanted leftovers of the human condition. Maybe it’s just me but I can’t help but think of the lines, And the dirt of gossip blows into my face / And the dust of rumors covers me, from Bob Dylan’s “Restless Farewell.”

Given the build-up of dust and turmoil, it is no surprise that Lynn Otto’s poem is tense with anger, irritation, even panic. Enjambed and broken lines litter the poem. I shove dirt / across the garage is a statement of barely-repressed repressed indignation. After all, I don’t think / I’m responsible for all this / dirt in the first place. And who is this someone who is going to be irritated if the work isn’t done? Perhaps this “someone” is the waking self, the self who dreams of sweeping.

The poem is a dream text. As such, it runs the risk of being interpreted from a psychoanalytical or mystical viewpoint (the house as a symbol of the soul or psyche, perhaps). Having raised this point, I do not think it constitutes a major line of inquiry. The real question, in my view, is: what are the secrets mentioned in the title? And why are the secrets not disclosed to the reader?

The intriguing title starts with the words “After I tell my secrets.” There is the hint of the confessional here. An emotional outpouring to someone unnamed. Or perhaps a forced confession, the figurative “coughing” up of secrets (to reference the last line of the poem). The fact that the reader is not privy to these secrets has the dislocating effect of shutting out the reader, but this is not necessarily a bad thing. Indeed, it may well be a deliberate act. Having already confessed once, there is no no need to confess again.

What is also intriguing are the semi-opaque lines at the heart of the poem:

[…] A child, mine,
walks through the pile and leaves
no footprints.

The image of a child who leaves no footprints is a haunting line – dreamlike of course, but also ghostly. Moreover, this is the child’s only appearance in the text. He or she wanders into the poem and departs just as quickly. I hesitate to speculate but is the child somehow linked to the poem’s undisclosed secrets?

Moving on, the second stanza offers some respite. How nice / to sweep instead of vacuum, I think. In fact, it is quiet and rhythmic, but the sunlight which dapples the wooden floor “turns out to be dust.” Like ashes in the mouth. And now a sense of rising panic:

[T]here’s a lot more than I thought,
so I sweep faster,
raise a choking cloud,
wake up coughing.

The closing lines of the poem are breathless in their accumulation of commas, climaxing with the final word, coughing. At this point the speaker is awake, the dream-image of a choking cloud having been transmuted into the waking reality of the physical exhalation of unwanted matter from the body. Does the act of waking up imply relief? There is no clear answer to this question, which is not surprising when one considers how clarity is fogged by the cloud of dust that pervades the poem.

All in all, the poem is wonderfully evocative, although sometimes evasive. And it is also a reminder that even in dreams we cannot escape the mundane tasks of the world , such as sweeping and cleaning. We are beings-in-the-world (to quote Heidegger) at all times of our existence. Awake or asleep we are never ourselves alone. We are always in the world in an ordinary and involved way, handling things, doing things with a view to achieving something. Perhaps this inability to escape the world – and all its dust and dirt – helps explain the anxiety that is present in the poem. And it is an anxious poem, a poem full of worry and irritation. It is only the poem’s ambiguous child who is able to walk through the pile of dirt in the garage and leave no footprints. But is this a good or a bad thing? The answer, it seems, is lost in the cloud of dust.