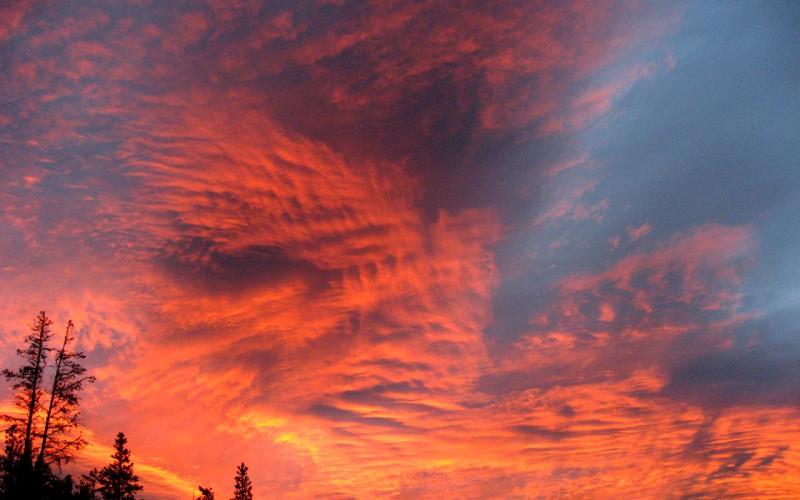 Dawn Sky by J.S. MacLean
Dawn Before the Day (That Comes After Everything We Know)

(Solar flares affect the weather but that doesn’t seem to phase
the icecaps, which still melt, unconcerned with cause.

I apologize for keying your SUV.

The train whistle is so loud it sounds like it has run off the tracks
and this way comes.

No need for an ear to the ground, the echo in the air
is sure of something.

Are the poets still full of their own sonics?

Because the children everywhere are playing in the woods,
and where there aren’t any woods, they are making forests

in the lowering light, I am sure

In half sleep, my throat is dry and deep like an old wishing well
down which pennies fall – count it, one-one-thousand,

two-one-thousand – before echoing back
faint clack against stone and final settling into dust.

In the still-dark though not for long of early day my sleeplessness is sure:
birds.

This poem explores the relationship of thought as presented in text, looking not for analysis, but synthesis. The “larger” lines are direct: the narrator, “half asleep,” wakes, and behind that thought live other thoughts, more complicated, that follow the net of the mind out into its expanse of its experience. Summer heat brings the narrator (and the reader) to solar flares, and to the oblique regret of keying a SUV. The poem attempts to present the non-linear—but not irrational—thought process that we all experience. By writing it as a poem, there’s an attempt to format, to create form from the mash, but not to dominate it, rather to open up the experience to the reader. This isn’t automatic writing (that enterprise that had frequently boring results), but poetry. The work hints at those traditions but doesn’t succumb to them, doesn’t become a parody of experimentation. Rather, the work can stand as a whole poetic experience as well as “experimental”. Consider the “first” voice without the parenthetical:

Summer happens like a scraped knee, fast, hot, sticky.
The train whistle is so loud it sounds like it has run off the tracks
and this way comes.
The shaking slats rock babies to sleep.
In half sleep, my throat is dry and deep like an old wishing well
down which pennies fall – count it, one-one-thousand,

two-one-thousand – before echoing back
faint clack against stone and final settling into dust.

It delivers on its half of the title; “Dawn Before the Day.” It has strong images, a direct impact, but the parenthetical is what gives the poem texture. The poem’s intention isn’t to muddy or obfuscate (a contaminant of too many works) but to present, as clearly as it can, this waking experience, before the mind of the narrator and reader fully dictates the terms of “The Day” that will decay in memory; thought left behind.