Ten o’clock is poking around my trash, and here I
am on the inside, petrified of windows. I don’t want
to try for rest just yet. I know how it goes: I’ll start praying
and forget what I’m begging for, debate with three cats
over bed-space, then recount all my wrongs – inflicted
even on people I haven’t met and can’t identify.

There are too many sins to number. I string myself
along the eternal abacus, whose beads clack like fangs.
Forgive me; I have been cruel. Forgive me; I did not
believe. Forgive me; I thought myself the only true sun
and dismissed everyone else. Send me wherever
failed stars go – where the iron hammers them down.

See me, Lord: I’m the one spinning without center,
straining to breathe the whiff of passing feathers.
I’m the one stretched over this canyon like a sternum,
a bone-bridge carrying my blur of red and white light.
I’m the one who can’t swim, but I jump off anyway,
trusting rocks will get me before the water does.

Wearing a lamp-nimbus, I use the Book as my soporific.
The resident angel asks to guide me through it; I shake
my head at his pale braids, gleaming in the mirror.
Instead, I choose to translate the icing on a hot-cross
bun. I wonder if holy words are edible, how they taste.
Sweet-berry, butter? I spread them hopefully on a roll.

The angel’s voice grinds me like a rockslide. I lie down
again, while he smokes and exhales very old stories.
In a rift valley, an almost-woman lifts her sandstone face
and stares up. Something stares back. She throws away
a half-eaten kidney, screams when her chest cracks open.
She falls asleep. The watcher crawls in, closes her ribs.

Firelight catches mudcrack skin, skips over
a ditch here, a delta there, moves above
the flicking tributaries that feed or erode.

This is your Nile, its rise and ebb a gauge to mark
the good years. You teeter on its amber bank,
girl-lady, reading illusions in a water hand.

What do you see of yourself? Reed fence to bar
the wild geese with their hunger? Furrow-curve
spiked with barley? Lotus mouth calling the sky?

Brief slash below your ring finger – nameless
son who leaves before you feel his body beating.
Venus mount – flaccid shrine to disappointment.

You rise to pling-pling sunset bells, their silver
trembling across the channel. Behind the world,
an old man holds a pistol and stares into his wine.

You dip long fingers, cup the river in their curl.
Your palms spread wet – empty beaches at low tide.
Every fallen drop of you shivers like a lost child.

In the Guller house, terrible things
were done to all the children.
I once lived around the corner, down
a mud road where the youngest
son sometimes walked. His name
was Charlie and I knew something
had to be wrong with his brain.
Nice ponies, he’d tell me, staring
past the edge of his own boyhood.
Ay-uh, them’s real nice. He’d grin
so wide I could count every one
of his tumbledown grey teeth.
He was eleven then, and growing.

In the Guller house, brothers, cousins
and uncles didn’t wait for the girls
to get their periods. None of them
stayed virgins much past five or six.
Except for the cripple, who had stumps
for legs and arms. They used to park
her on the step just to get some sun,
like a plant kept too long in shadows.
Neighbors said she didn’t mind, she was
a vegetable. I had no opinion on that.

In the Guller house, they ate cow-corn
stolen from a field across the highway.
The farmer hooted and slapped
his knee, because they were filching
his cattle-food and he figured it
was funny. I never saw any garden
in their scraped-raw yard. Battered
cars buried the lawn, and junk trucks
made fences. But the social services
and public health station wagons shone
in the dust. So did the small daughters.

In the Guller house, a nurse hesitated
at the threshold with her medicine kit,
while Charlie’s father was breeding one
of his nieces on the kitchen floor. Hold on;
I ain’t done yet! he grunted, and finished.
The nurse told everybody, but this was
the 1970s. Incest was just a family affair,
except for the babies. Every once in awhile,
they got taken away. Charlie became
a man–with two kids by his sister–
before a Guller finally screamed, loud
enough to disturb the sweet community.
She was thirteen. They tried to shut her up.
By then I’d moved to another county.

In the Guller house, two hundred years
lie black as a dirty stove. The rape-
room is gone: part of a chicken coop.
I suppose the cripple died; Charlie
and his kin should still be in prison,
although probably they’re not.
The laughing farmer’s dead, too. Lost
children drift in the convenient dark,
names without faces, because it’s easier
for the rest of us. Good people still
drive past the ruin, shop and work
and age. Harsh January air cuts
across the South Mountain and sandblasts
an empty driveway–the same wind
that abrades me now. But I’ve never
been hard-blown open, a broken door,
a Guller child.

Your twisted lips betray you: here’s a cry
that never ends, a mouth that could not close
as Horus’ wings descended. Did you die
in hope or helpless rage? When dust arose
behind your falling chariot, did your soul
regret the careless spear that let it out?
Your body – now in wrappings flecked with kohl
and skin-cell residue – wears at its throat
a brazen ankh. What vain eternity
can artifacts confer; what scarab save
your brain, o king, from its mortality?
So here you dry in this unprivate grave
while I, with camera poised, adjust a dial
and shoot you – twice – as someone hollers, Smiii-ile!

Before I strike the knocker on its plate,
their voices battle through the metal door.
Get out!
You go to hell!
I’ll always hate
your lying face. I clutch my parcel – sure
these soaps and creams are now irrelevant
as ash or stones – and leave it on the sill.
No doubt the second honeymoon she planned
won’t happen. One block past the cotton mill,
His Mistress buys more lipstick. Sacre-Coeur
is next, where nuns pay well for cloudy scents
of paradise. La Mère Supérieure
assures me that she’ll give them up for Lent,
and asks if I might join her in a prayer.
God help me not to think, or judge, or care.

Teaching His Raven to Talk

I’ll split your tongue, he says. I hear it works.
So he will make me speak against myself,
a cloven-mouth whose voice is born of steel.

I close my teeth to fight against the blade,
and turn my chin aside. He presses hard
and opens me, then slits. He pulls away.

A wet bead dangles from his hunting knife.
My ears roar like a coliseum mob.
Blood falls, searches between my breasts, runs

its hot tar along the keelbone. Redburst
syllables, wordless prayers, bubble-curses,
rise and break. I stop them with my left hand;

it does not belong to me – nor my mouth,
nor that divided worm behind my lips.
If I scream, will he consider it speech?

I do not scream.

I will not make you sway above your naked basket,
unfit lodging for such a king. If I play my bone flute,
it is for my own distraction; you need not waltz for me.
Your gaze embraces my split limbs with longing.

No mirror shows you the fire in your own skin,
noble gold crossed with thin shadow, like a man waiting
at the underworld door. We are not unequal, friend.
You covet my thick lungs; I crave your flame.

The burnished scales drop no lower under me
than you. I offer oxygen in trade for your burning;
I feed and you incinerate. Do not regret our differences.
You have known that Garden where our mothers

were wrenched from pale dust. I still scrabble
for some sign – even a rusted bar from the gate.
I now believe it never existed. I have not witnessed –
but you remember well. Under your jaw you held

the reddest fruit, swollen with a god’s thoughts
and rare as Isis’ glass – she who raised you,
she who seduced you. You could not refuse her
these intelligent seeds. They say Eve shared half;

I – her many times daughter – say she ate to the core,
leaving no bite behind for her rib-father-mate.
The exchange for awareness is birth, not creation.
How did you feel, friend, when the seraph’s sword

drove you both into the desert? I think you might
have been relieved. Too much goodness smells sour,
mucus on the tongue. Fig leaves are meaningless
to you, who seek your bed in sandstone crevices

and warm yourself with the sky’s leftovers.
Still, it is better to be scorned by an ugly angel
than to be disappointed by imaginary wings.
The white linen tide has ebbed from this place

but it is still hot. A clay cup on your master’s table
overturns when the wind brushes it. Drops leak
slow and shiny – blood for you, wine for me.
Or perhaps it is the opposite. Neither of us

may taste the other, friend. You lick air,
my scent resting like breath, one Ma’at feather
you cannot dislodge. I stretch my hand to receive
your blessing. We dance together at the last,

my flute quiet in the road. We listen to the tavern
cawing: a murder of tourists. But they do not walk
this way. There is only the pomegranate sun, descending.
You unstop the toxin in your teeth.

While you dream, I rise from my copper rest
to meet your every need. No tile is left
unwashed, no drawer unopened for a whisk
against your crumbs of happy appetite.

But you, my quiet love, stretch flanneled legs
toward the constant fire. I – colder, here
above its heat – must insulate myself
and carefully direct my rebel arm

to flick dust till no flameskin ash remains.
I am your guardian, of course. You’ve ordered me
created at your whim, a perfect shape
to please whatever man is prisoner

behind your ribs, (their slow beat winding down,
a sundial that you carry even now,
when winter locks the river). Still, I cleanse
without complaint, until I am assigned

elsewhere. A feather descends, o my lord,
onto the balance that will measure you.
I am incomplete, though you acknowledge
some gratitude for my obedience.

A cotton comforter curves over me –
March sea of lapis and malachite – edged
with lace brighter than foam. I, mummiform,
lie weeping. Faience-glazed. Never reborn. 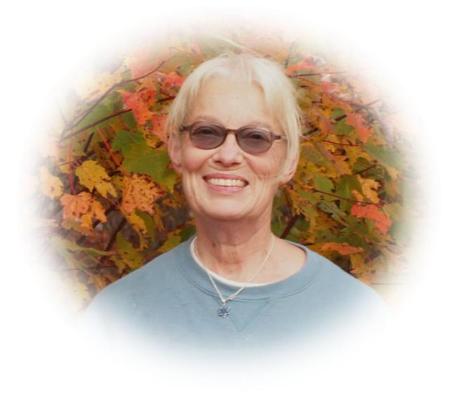